A Dangerous Balance of Anonymity and Familiarity 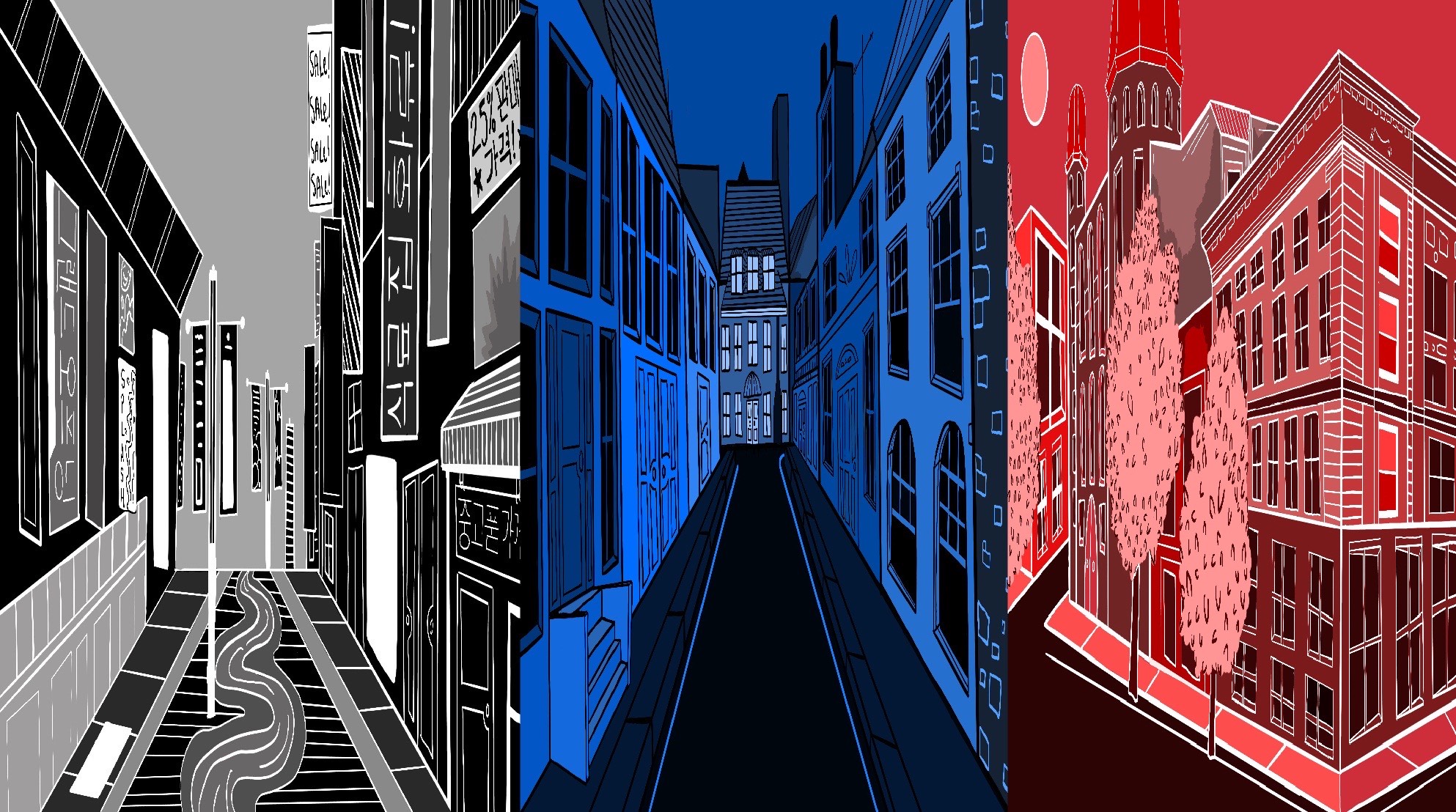 An Insight into Intentional Exploration

By the age of seven, walking had become my childhood addiction. I knew nothing of using the public transit system, bus routes, or private car rentals; instead, I relied on the faint thudding sounds of my stubby two feet clumsily on procession down the neighborhood streets of Pohang, South Korea.

The drumming of my feet carried me from the foot of the bed I shared with my brother, through the disappearing trail in the wooded back field, and to a converging road that held my primary school, an art studio, and two convenience stores. At the end of the main street laid  the entrance to a greater city-state, separating my neighborhood from an imminent bustling city persona. The location of my then-community balanced a duality of identities: one that embraced the ease of a tight-knit community and another that sought anonymity in the background of 50-story buildings.

A child at the time, I was restricted from travelling into the nearby city, unable to take my wandering into the commotions of urban life. Had I been able to, I would imagine the imminent metropolitan culture beyond my neighborhood resembled the setting for Virginia Woolf’s essay, “Street Haunting: A London Adventure.” 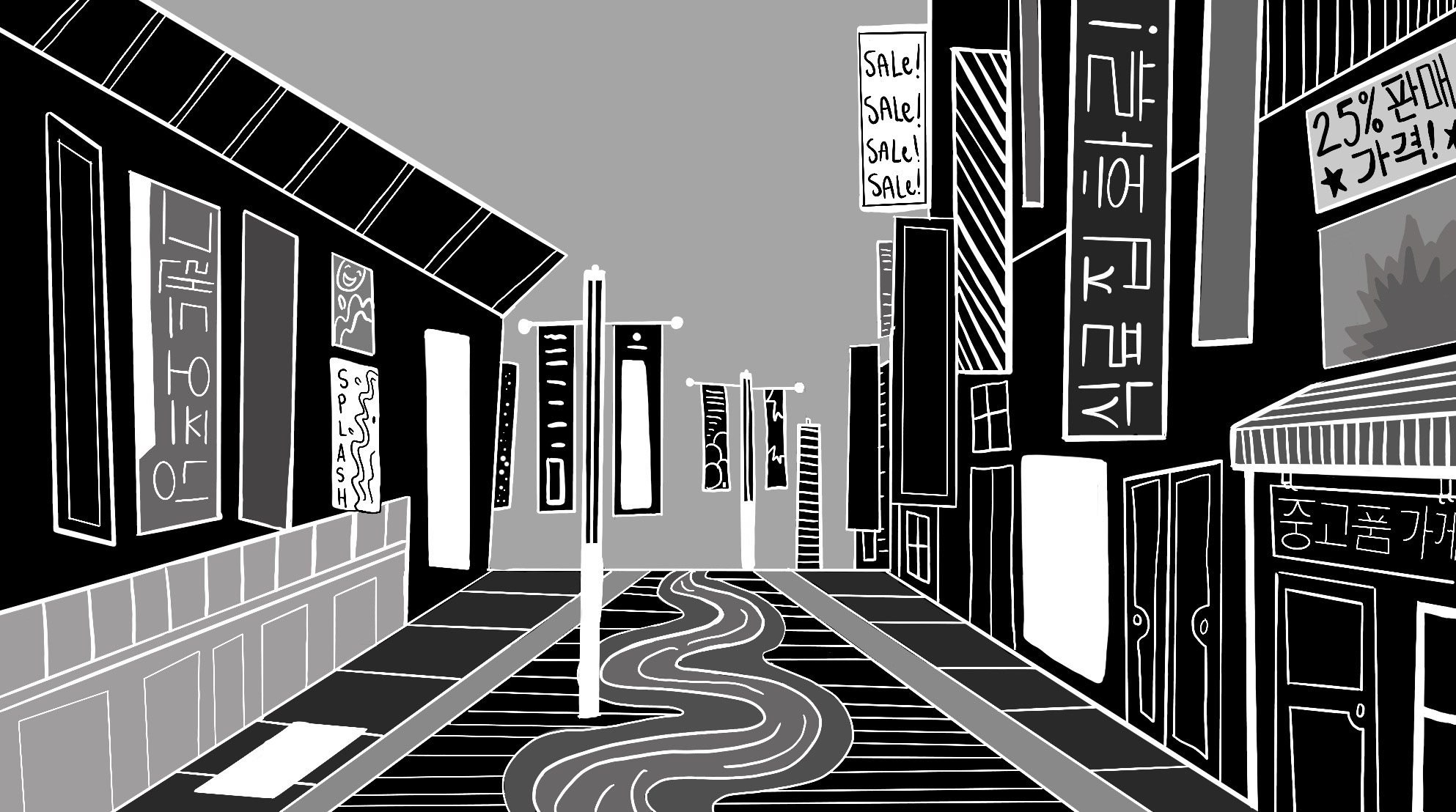 Caption: An illustration of a shopping area in Pohang, South Korea.

In “Street Haunting: A London Adventure,” (1930) Woolf describes a winter evening stroll through the streets of London, under the premise of searching for  a lead pencil. The pencil introduction swiftly turns into an excuse as Woolf uses the excursion to share stories of strangers and describe the streetlife of London under the cloak of anonymity.

“how beautiful…” Woolf stated as she started her walk. (1) Evenings in London are said to be with “islands of light,” “long groves of darkness,” and “some tree-sprinkled, grass-grown space where night is folding herself to sleep naturally;” thus creating a splendorous landscape of a metropolitan area during the evening hours. Awe continues as Woolf confides appreciation and respect for the culture of speed and productivity in the city, stating that the street people are “… bright men and women, who, for all their poverty and shabbiness, wear a certain look of unreality, an air of triumph, as if they had given life the slip, so that life, deceived of her pretty, blunders on without them.” (1)

In observing the city’s passerby, Woolf begins to develop interest in delving deeper into the seemingly impenetrable lives of residents; bridging into the story of a dwarf shopping for shoes and a bookseller’s wife finding passion in hats. “The moment was stabilized,” she said, establishing meaning in the noticeable momentary beauty, “like a coin indelibly among a million that slipped by imperceptibly.”

Wandering through the London streets gave Virginia Woolf the power to distill time and conjure beauty in unfamiliar stories—the keyword being “unfamiliar”. In roaming through my 5-mile neighborhood, I never experienced the outsider perspective as a child, only the comfort of first-name basis with locals. In this sense, I remained unacquainted with the artistry of city street haunting. Extending Woolf’s message of brevity in walking to local and familiar communities, I found a linkage between my childhood wandering and the walk described in Miriam Toews’ “A Father’s Faith.”

“A Father’s Faith” works in tangent with Virginia Woolf’s “Street Haunting: A London Adventure” with the symbolic use of a walk through a central location. Toews recalls her father’s last walk through her home in a Mennonite community before committing suicide at the local train station. Through the use of familiarity, Toews draws on her father’s elaborate stroll through nooks of the town, stating that he walked past his “old neighbor Bill sitting on his lawn chair,” “cemetery where his parents were buried,” and “past the Frantz Motor Inn” (511). Toews’ father kept walking towards the café near the railroad track where his wife and he used to go to get away. There, he greeted a young woman named Stephanie and took his life on the tracks.

Toews, herself, never liked the town. Its tight-knit culture and sense of control were lost in routines, but she yearns for the comfort that the town gave her father. This portion is encapsulated in her final paragraph: “What I love about my town is that it gave my dad the faith that stopped him from being afraid in those last violent seconds he spent on earth.” Through this message, the picture of her dad’s walk to death symbolizes how the familiarity of his walk has led to comfort, but also his demise.

The walk through the small town juxtaposes the city life mentioned in Woolf’s essay. Woolf’s mentions of “bare trees,” “butchers’ shops,” “florists’ windows,” and “lamplights” (3) contrasts directly with Toews’ description of a “beloved hometown,” “Elmdale School,” “Frantz Motor Inn,” and “Brandt Road” (511) by the addition of known names of locations. Such a small yet nuanced difference in the affinity of the writers to the location of the walkers creates a divide in the core of the essays; while the Mennonite town is founded on intimacy, the city conjures the perfect snapshot of anonymity.

The difference in the anonymity of Toews’ and Woolf’s walks led to variation in the ending of the protagonist: one led to demise and one  to exploration. Toews’s description of her father’s walk held components that were already cemented in his identity: the town, the people, the sincerity and shared religion. Woolf’s, on the other hand, introduces a concept of city escape: “to escape is the greatest of pleasures; street haunting in winter the greatest of adventures.” (7) These two seemingly incompatible stories tell a complementary narrative of what happens when one cannot find an outlet for escape. Toews’s father could not find that sense of adventure in his routine life and turned to death as the final means of escape. Furthermore, Woolf presents the idea of too much familiarity, saying that: “it is comforting to feel the old possessions, the old prejudices, fold us round; and the self, which has been blown about at so many street corners.” (7) In this way, Toews furthers the concept by adding an element of a breaking point: habitual and routine comfort no longer retains the full essence of healthy comfort.

Another contrast that highlights the dynamic of the two essays is the characterization of the traveler versus that of the people on the street. Toews focuses on evoking the identity of her father, who strolls  around the town. She comments on her father’s depression; the way his façade would present a lively and vibrant person to the kids and church members of the town, yet fall when in the comforts of his house. His home is his only means of escape, but even then his family feels the weight of his mental illness, creating a tint of discomfort in his haven. 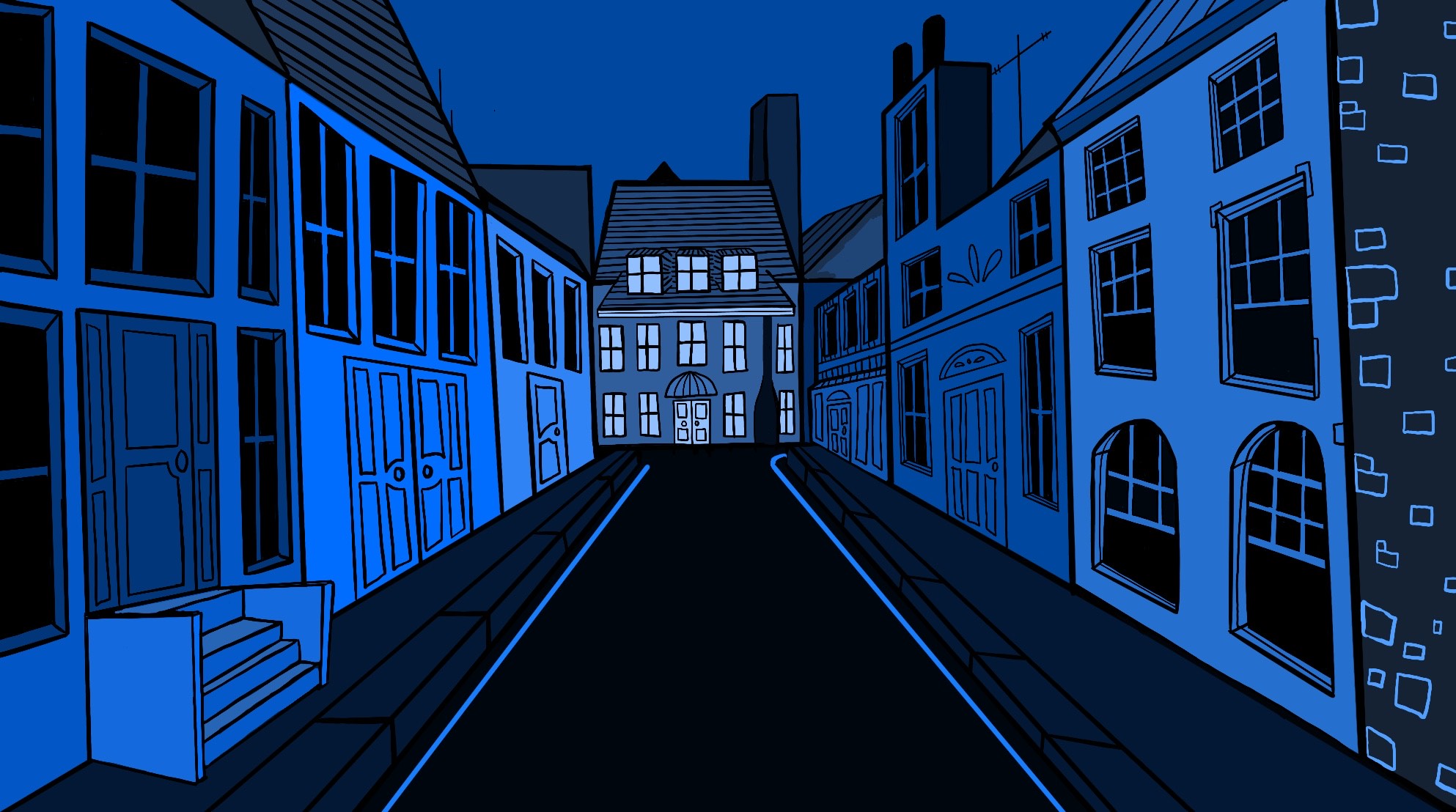 Caption: An illustration of a street in London.

Woolf, on the other hand, presents the walk as though the reader is also going through the walk by using the impersonal term, “eye”, throughout the passage. Her lack of characterization on herself presents the idea that anyone can walk the same walk through the city for enjoyment – and should. The difference in narrator characterization creates a more personal tone for Toews’s narration, dwelling on the unspoken concept of inescapability and incurable loneliness.

The boundary between escape and comfort continues to impact my perception of my geographical surroundings and the walks I embark on. Since my time in the outskirts of a South Korean city, my passion for biped  treks have dwindled into an engrained appreciation for unpremeditated wandering; I’ve succumbed to the 21st century contemporary culture of journeys to designated destinations. However, the impact remains as I choose where I identify as my home during my development as a student and a young adult.

My time in Pohang ended shortly after my 8th birthday when my family decided to immigrate to the United States. I’ve travelled from Maryland to Virginia; where my mother, my brother and I found permanent homes at the top corner of the DMV triangle. There, I found meaning in the hikes I took through my suburban region, passing the local elementary school onto the Wegman’s sitting at the end of Lincoln Apartments. As I strolled past community homes and apartments, walking lent me the power of introspection and contemplation, slowing my own thoughts to create logic in previous and future plans of action. But suburban Virginia extended beyond the five-or-ten-mile radius I had back in my home country. I eventually took my seat on the left side of the car, behind the roaring engine of a silver 2007 Corolla.

Only recently did city life call out my name, through the voice of my Richmond-based college. Richmond is my Pohang, the entrance past the 5-mile neighborhood. My next teen years will explore the bridge between Toews’s familiarity and Woolf’s invisibility as my college campus and downtown Richmond presents contrasting ideas of freedom: the liberty of academic pursuit and the escape in a city setting. 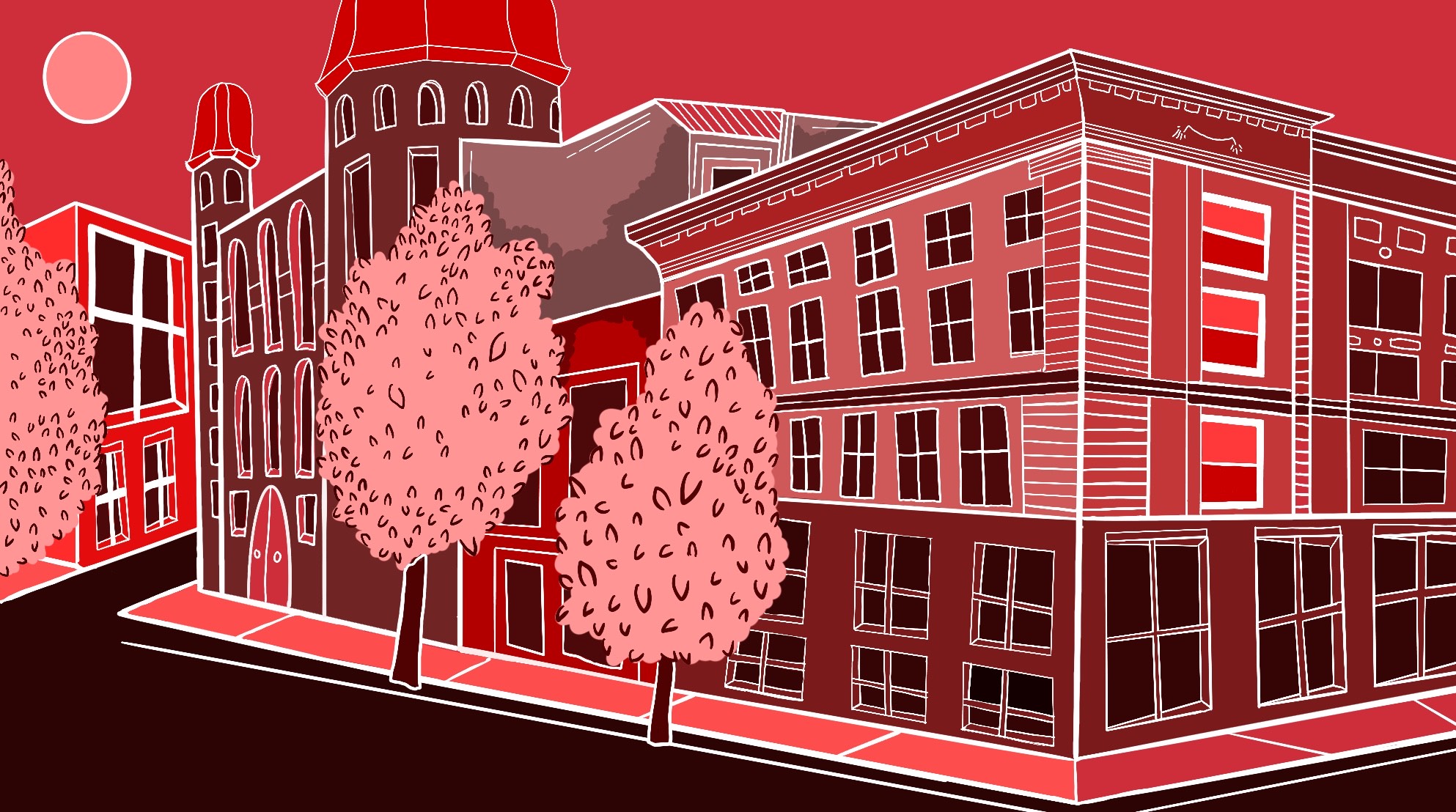 Caption: A street view of the Arts District in Richmond, VA.

The English, anthropology, psychology, and science classes on my four-year schedule impel a rigorous level of chronology and order to meet the end goal of graduation. Even with the thrill of amassing new knowledge, my college time will inherently constitute a level of routine and habit, endangering moments of growth and stimulated reflection. On those days — on days when daily life dwindles to simple comfort and safety — I turn to downtown Richmond for guidance.

I will wander down RVA’s Broad Street in the spring evenings, searching for stories of passers-by as my own becomes stagnant. These stories will level my eyes to the excitement, pain, regret, and longing inherent in all stories of humanity — stories that require my own practice of empathy.

Chilled autumn afternoons will push my legs to complete strolls in the nearby Art District, giving me yet again the ability to slow my internal dialogue and preserve conscientiousness and self-examinations. I continue to fight to gain and regain my own sense of self, and in doing so, conjure up my own escape.

At nineteen, I walk, stumble, and seek to synchronize my momentum. The Richmond breeze will cool the sweat from my neck and inspire my two still-stubby feet to drum up the old 7-year old rhythm to the cadence of a life adventure.