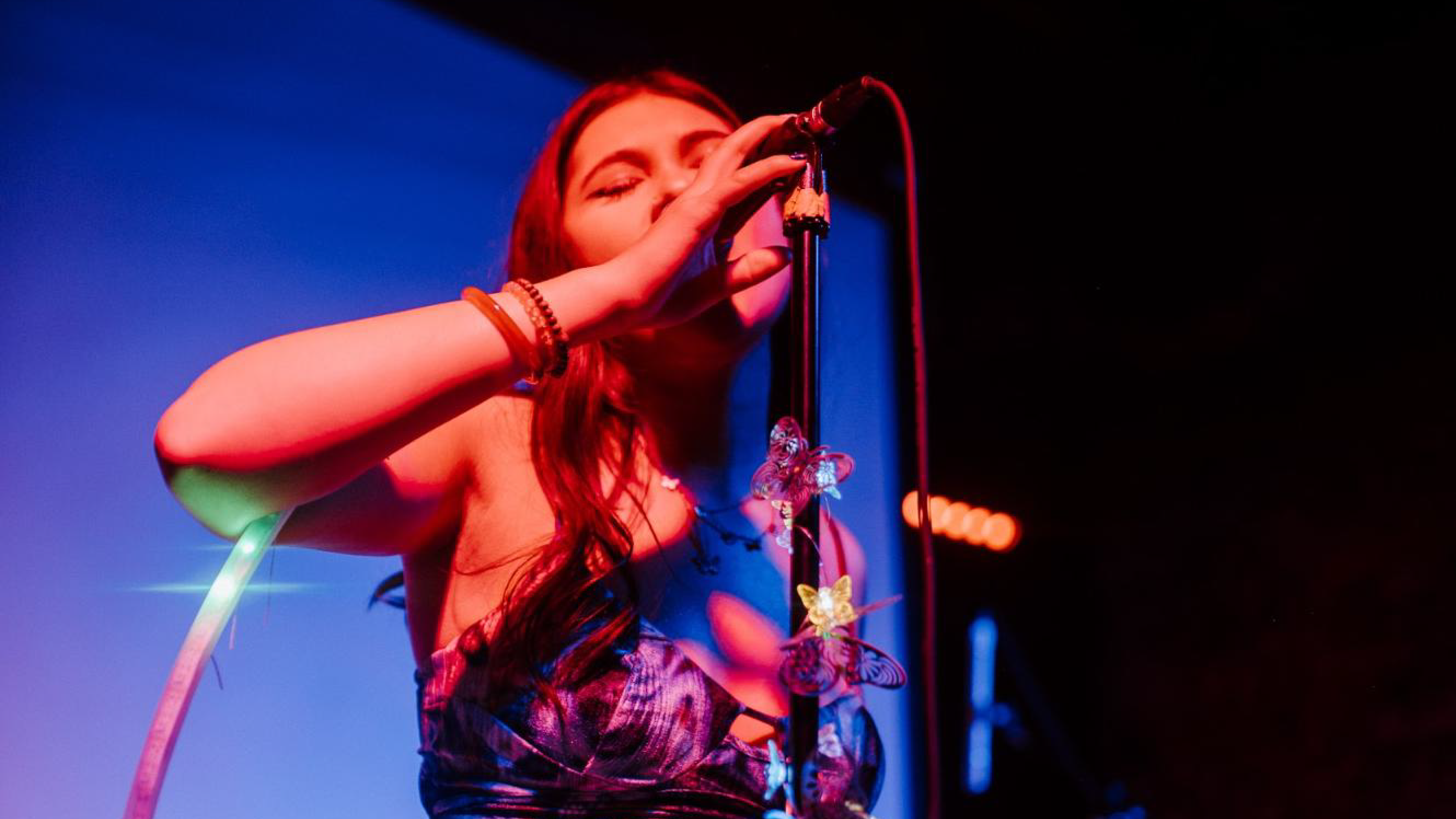 Marilyn Pham, a local Richmond musician, released her album, “Luxury,” on Sept. 23. The eight-track project contains a plethora of self-reflective ballads that are sure to get stuck in your brain.

Following the album’s release, Pham hosted a night of lively performances filled with an infectious energy. Other local talents like Martial’s Law, Pinot and CAS were all invited to perform with Pham at the Richmond Music Hall Thursday, Oct. 26.

“What is your favorite song that you guys performed tonight and what is the reason why?”

Noah: “Either ‘Old Bones’ or ‘Daisy.’ I think ‘Daisy,’ for me, because it’s not something ([I] usually do)… Typically, I come up with lyrics, and some things are my material, but this was completely different. It was like learning someone else’s thing. I had a lot of fun adding my own things within, rather than coming up with them. It was all instrumental…”

AJ: “I really like our cover of ‘Sixteen Tons;’ It’s a lot of fun to play because we change it up and add our own little things to it. It’s really cool to have our own take on a very, very old song.”

Jacob: “I liked our new one, ‘Old Bones.’ I thought we played it pretty well. It’s a little country, but not too much”

“What did you have the most fun performing tonight and why?”

Pinot: “Definitely my song ‘Zodiac.’ I got to perform with one of my best friends since I started making music. It is really just an honor to share the stage with him and let people hear that live for the first time ever. That’s my boy RXYNE (Rain). You’ll find him on SoundCloud. He has some crazy music out, definitely check him out.”

“The energy that you bring on stage is super raw and super energetic. You have a way of touching the crowd… Where do you think that comes from?”

CAS: “I think it comes from a lot of my inspirations.… I grew up listening to Aerosmith, Guns and Roses and B.B. King. B.B. King, especially, would talk to the crowd and I kind-of incorporated that into my set. I want to make sure we [the audience] are on the same page. If you’re on the same page with the crowd, then you can really project your music in the right way.”

CAS put his guitar over and behind his head and began a crazy jam session during his performance,  just from feeling the chords of the guitar.

“How were you able to do something like that? Did you practice that or…?”

CAS: “Well, I grew up playing Guitar Hero. I was a big fan; that’s the reason why I play guitar. I could always play Guitar Hero behind my head. It got to the point where I was like, ‘I’m really good at playing Guitar Hero, let’s move it to an actual guitar.’ I tried to do the same tricks I did while playing the game and one day it kind of just happened.”

“What was your favorite song performed tonight and why”

CAS: “I would say ‘Oversized Comedown.’ It’s just one of those songs… I’m about to release it on my album ‘Lackluster.’ It’s one of those songs that resonated throughout the whole year, a song that people can have fun with in the crowd. When I sing it, people reciprocate it well and they can sing it back to me. That’s my biggest thing… I wanna make sure that when I’m writing lyrics, the people in the crowd can also sing them back”

“So your album, ‘Lackluster,’ When is it coming and what do you expect or hope from it?”

CAS: “It’s coming Nov. 4. I hope that someone, even if it’s just one person, gets something out of my album. I hope they hear something that triggers that feeling… I want all emotion on that album because that’s what it came from… emotion. It’s just an emotional album about my upbringing.”

“When you guys were performing all together on stage, there was a lot of chemistry and understanding. How did you get to that point? What did you have to work through to get there?”

Marilyn: “Honestly, we didn’t have to work… we just worked [well together already].”

Milo: “I’m glad we were able to give that illusion.”

Steve: “We kinda all jived together and it just worked.”
Mateo: “We just started playing and that was it…”

Marilyn: “We literally started playing and I was like, ‘I picked the best band ever.’ They were amazing.”

“What was your favorite song to perform tonight and why?”

Mateo: “I think ‘Honey, Honey’ or ‘Sugar’ because they are so fun [to perform and listen to]”

Marilyn: “My favorite was ‘Traces’ just because I get so into it, it’s so soulful. That one’s really fun. Every time I’ve performed it with the band, it was great!”

Steve: “I would say rooftops because that was one where I could play chords with Mateo. We kinda just rocked out… Especially at the very end, it was a great way to close out.”

Milo: “I would say ‘Relevant’ because there’s this moment where the whole band breaks right at the beginning of the chorus. One time we almost messed up a little bit and I just remember laughing it off. In a way, it was funny. It was just fun… There’s no other way to describe it. It was just a great thing!”

Marilyn: “The crowd and the music coincide. The energy you give the crowd is what you receive… and vice versa. Just bouncing off each other is really fun. The crowd was amazing tonight…

*Steve chimes in*: “I don’t know why they kept screaming my name… *laughs* They should’ve been screaming ‘Marilyn!’”

Mateo: “It definitely helps and gives you more meaning when performing.”

Milo: “yeah… the crowd and their energy dictates the show. It’s a very, very important aspect [when performing].”

“This question is for you Marilyn… you seem to have tapped into the locality and the community of Richmond really well. How were you able to get to that point? What did you do to get you here?”

Marilyn: “Honestly… by working my ass off. I am working really hard and making these connections. My music isn’t just music, it means something and when people can relate to that… it means the world to me; between me and the listener, we get each other and understand.” Finding people and having people that support me means the world. I have amazing friends… an amazing family… and an amazing community that I worked really hard to earn.”

“What does the album “Luxury” mean to you?”

Marilyn: “It means that I have free will and I can do whatever I want. I never want to feel tied down the way I did when I was writing the songs… It was a way of breaking free from this really awful place in my life. The album is just a big comeback, if that makes sense…? It’s like saying, ‘you do not define me,’ or ‘that awful person does not define me…’ ‘You changed me for the better, and screw you.’ *Laughs*. It’s just great to be able to make art out of my pain. It gives my pain meaning. Pain is something that happens in everyone’s lives… It’s inevitable, yet I was able to take control of my pain.”

“What do you want your listeners to take with them from Luxury?”

Marilyn: “I want them to know their worth and that they have complete control over anything in their life. You are that bitch! You can do whatever you want! Know your worth!” *Laughs*.

The show, nevertheless, was a charming and gratifying experience. From the jams of Martial’s Law to Pinot’s spirited performance, and even CAS’s raw guitar solo, the energy in the Music Hall that night felt sincere and full of love. Marilyn’s final act of the night brought the crowd together in a sense like no other. If you know Marilyn Pham, you’ll learn how her restless, exuberant energy is able to consume anyone after meeting her just once. Congratulations Marilyn on the release of a great album! We can’t wait to see what the future holds for each artist.