A Sandwich, The Sweetest Taboo in Modern Feminist Times 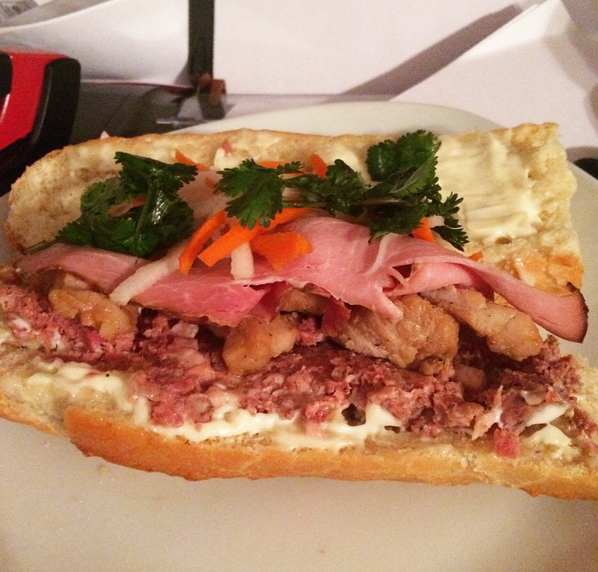 At the moment, I and the other most unfortunate of really fortunate souls known as “college students” are taking exams, and finishing all of the projects our professors forgot to assign at any other part of the year. It’s tough knowing that you need to be studying, and also knowing that you’d much rather be:

With this kind of stress mounting, everyone finds a way to cope. I relieve stress by cooking, because I love saying that I am “exploring a culture” while blowing all of my money on bread or pâté, and then eating that bread or pâté. All of it. Sometimes with friends, sometimes by myself, because I can be a woman making a sandwich and still be as independent as a komodo dragon (female komodo dragons can, without having sex, lay eggs that develop into male offspring. You learned something today).

This past Thursday, I made bánh mì. Now, “bánh mì” actually just means “bread” in Vietnamese, and since it’s annoying enough to hear terms like “shrimp scampi” and “chai tea” used regularly (both of those mean the same word twice), I specifically made bánh mì thịt nướng—BAHN-me-tit-Nuung–, which literally translated is “bread grilled meat”, but the correct translation is “grilled pork sandwich”. Made with pork pâté, ham, marinated pork loin, pickled carrot and daikon, cilantro, and jalapeño all cradled in a baguette – the bánh mì thịt nướng is a food history lesson in Vietnam’s past as a French colony, fusing the two culinary profiles together before “fusion restaurants” were even a thing. How very hipster of you, Vietnam.

The ingredients I used:

For quick-pickled carrot and daikon

Of all the ingredients, I was surprised to find that my favorite was a condiment—I’m talking about fish sauce. Fish sauce is a very common ingredient in Southeast Asian cuisine, and you’ve probably had it already if you eat Thai or Vietnamese food. Amber-colored and typically made from anchovies, salt, and water, it has a salty/tangy/umami character that makes me clutch my rosary beads just thinking about it. It’s pungent, almost sour smelling, but even if you don’t like fish, just try it. You’re putting it on something else, not taking a shot of it.

If you are hesitant about Vietnamese food, let me say this: my first experience with Vietnamese food was not a happy one. I had phở (pronounced Fuh) and I’m fairly certain that, at this particular restaurant, the broth was made from toilet water. But, as my version of the old adage goes, “I’ll try anything once, and then usually multiple times until I am granted the whip-lash of realization that I could be leading a better life”. Take note, exes. I knew Vietnamese cuisine and I had something special, and that Vietnam still had a lot to offer. At least, this is what my stomach told my heart. So I returned. And I didn’t regret it for a fish sauce-stained moment.

If you want to recreate my particular recipe, a combination of guess work and stuff I read on the internet, here is my process!

To prepare the pork loin, get your meat pre-sliced or slice it yourself, which is what I did because I have trust issues. Put it in a bowl, throw in fish sauce, soy sauce, and sugar to your liking. Minced garlic could be good in here as well. Leave it in the fridge for at least half an hour. Once it’s marinated, take it out, throw it in a on a grill or in pan over medium heat, and add salt and pepper to taste. I wait until cooking to use salt because I think that marinating with salt dries meat up. Cook your pork until it is white all the way through.

To make the pickled carrot and daikon, just throw all of it in a bowl with the sugar and salt and let it sit for at least 15 minutes. The salt and sugar will draw moisture out of the carrot and daikon. Once time is up, you should be able to twist the julienned pieces without them snapping. Drain the excess liquid and set aside.

Now it’s time to assemble your glorious bánh mì thịt nướng. Light a candle, put on some mood music. Cut your baguette lengthwise, but not all the way through. Spread mayonnaise on both sides, then the pâté on one side. Next, add a layer of pork loin, then add the ham, pickled carrot and daikon, cilantro, and top with sliced jalapeño—let people know about this before they eat it, because not everyone likes that much heat. A warning, this sandwich is going to be dense. But now you can eat it!