Interview and Photos by Gabe Lugo 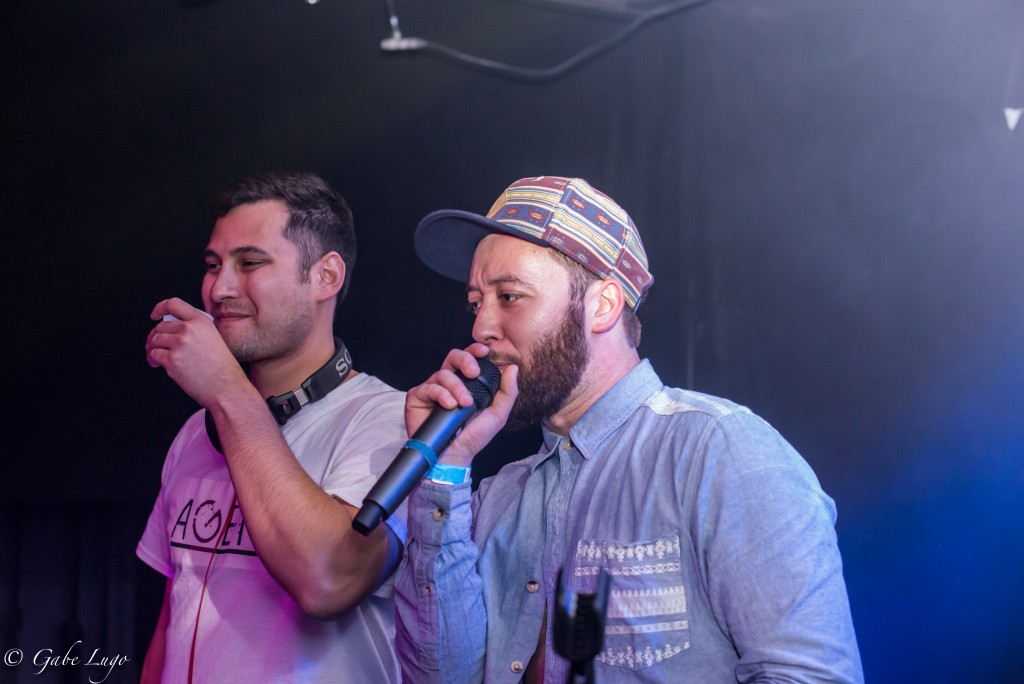 So you both recently opened up for What So Not at the Broadberry. A lot of people say you guys killed it compared to What So Not. How do you feel about that?

Elliott: The intention definitely wasn’t to outshine. The first kid came on and banged way too hard, so I came on and like brought the energy down. Alex and I work together a lot, so I played my thing and kinda flowed into what I knew Alex was gonna play. We didn’t wanna tread on What So Not and what he was doing, we knew he’d be left field so it was hard to know where exactly we needed to be hypewise or style wise.

The first dude who played before us was a new dude, this was his first solo set, he was clearly stressing and having trouble with his equipment. But we showed him some love, I understand where he was coming from. We were just like, relax, we encouraged him. I’ve been in that position before and dealt with dickheads, and that’s offensive, he’s out here trying. Even if he came out a bit too hard, he did his thing as best he could. Gotta spread the love.

Alex, you have a festival coming up right?

Alex: I have a few coming up actually. I’m really excited for Counterpoint. I’ve been doing this for a while and breaking through that glass ceiling and getting on that lineup is just awesome. I’ll be playing  at Big Dub Festival in PA. Last year I closed it out and they invited me back again this year. I have Barefoot coming up too with Big Gigantic. For the past four years we’ve run the silent disco at Barefoot. We’re like the badboys, we have a little EQ productions nest. Nothing about is is professional, ever. We go fucking crazy.

Elliott: I’ve got Barefoot and Rooster Walk. I’m holding down Rooster Walk while he’s slaying it in ATL.

How would you describe the festival experience versus the more intimate small room experience?

Elliott: I would love the perfect Sunday bar lounge groove. I could play like a perfect tight feelgood set, stuff I’m really feelin. Festivals though, I really get the chance to wild out. You get to turn a lot of people on. A lot of the people that come out to these festivals aren’t as much into electronic music, so if you get them into the silent disco you have to show them something to make them want to get into this. I throw in all sorts of references and shit, it’s all over the place. You want to appeal to as many people as possible.

Elliott: I agree 100%,  you get to be yourself at a festival. Opening acts, you get paid to hype the headliner. Bars and stuff, you are being paid to entertain people a specific way to keep cheeks in the seats and buying beers.

The two of you perform together often, how has your friendship and professional relationship as musicians grown over the years?

Elliott: Dude we’ve always just vibed, we have similar appreciation for such a wide range of genres. We appreciate different types of music in similar ways. Our passion and approach to music are just similar, so we’ve been boys since day one. 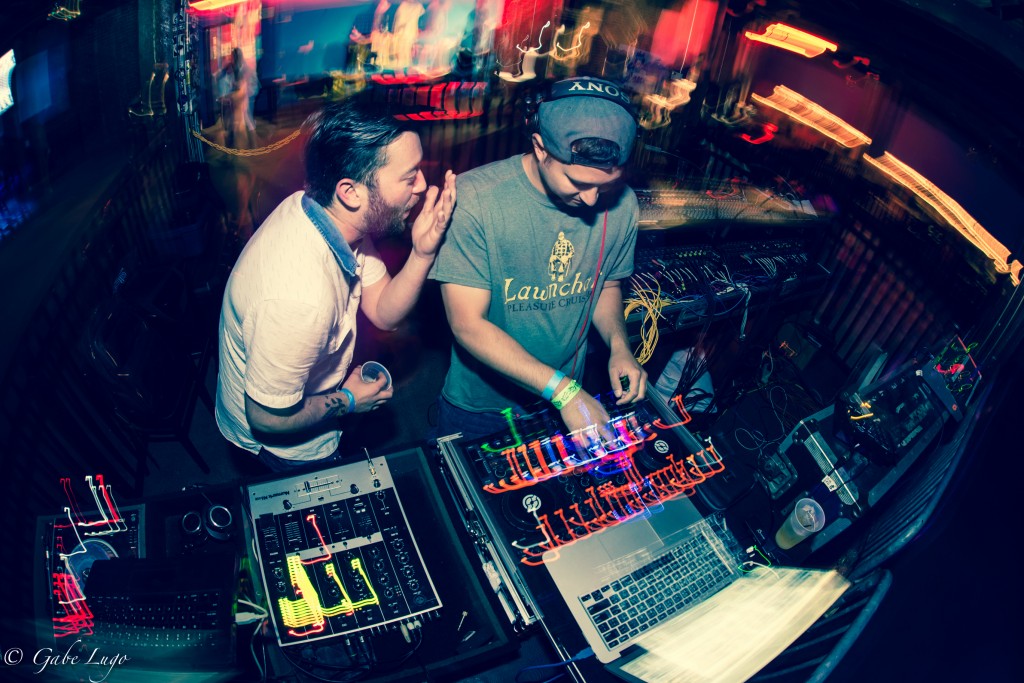 How tight are you guys with other local DJ’s, like Phil Dice for example. Ya’ll seem to play together a lot too.

Elliott: Do you know what TDP is?

Alex: TIGHT DICK PLAYA. It’s from Eastbound and Down. We lost it after we saw that like two years ago, and now we say “Tight Dick Playa” after everything. Our trio name is Tight Dick Playa. TDP. It’s actually on the flyer for our show friday, it’s not even an inside joke anymore. We’re pretty inappropriate, but just the right amount of sincere and gentlemanly all at the same time.

Elliott: There’s Phil Dice, Groove Status, Azztek, but pretty much every local DJ. We know them all and embrace all of them.

Ethan Glass, extremely talented dude. This kid’s out there playing purely original material, killing it. They’re all homies in real life and we are very connected. The whole point of this all is to further the movement that’s being spread in this city.

How has your music changed over the years? Would you attribute any of that change to fan feedback, or is really just a personal growth and exploration or your own style?

Elliott: Bit of both for sure man. I feel like I’ve always been a year or so ahead of the big shit that was about to hit. I was ahead on Moombahton, gritty dubstep.. people hated it when I was playing at first and now it’s hot shit. We do our research, we’re always a bit ahead.

Alex: I recently heard Laidback Luke give a class, he said there’s an art that’s lost in DJ’ing cause it’s all so digital. It’s all about finding that diamond in the rough.

Elliott: Yeah dude we spend hours on SoundCloud just searching different hashtags and searching shit that may or may not suck. Random words, seeing what pops up.

Alex: #TourretesTrap
–Everyone geeks out–

If you could perform at one last festival or venue before you die, where and why?

Elliott: That’s a good one man. Shambala. It’s just straight up, the groove. There’s a lot of influential DJ’s, actual turntablers working with the new guys. People try new shit out there and it really brings the freak out of you. Burning Man would be tight on the same tip, just the tip.

Alex: To be honest, I don’t think I’d want anything that big. I pride myself in not being a fanboy, I try to be really humble and shit.. but I’m extremely obsessed with the Dirty Bird label and Claude VonStroke. They throw these summertime festivals called Dirty Bird BBQ’s. If I could ever play a Dirty Bird BBQ I’d die a happy man. They’re like Mad Decent Block Parties, but it’s Dirty Bird. They cook shit tons of food and play real deep garage house vibey type shit.

What are your day jobs?

Elliott: I’m a teller at Wells Fargo. Getting my A+ Certification to work in their IT Department. Just a backup easy solid corporate ass career, just in case all else fails.. which it won’t. I can ride this out proper.

Alex: For me I’m in a very fortunate position. I play a lot of video games, so I think I was born with like +10 luck. I always get into situations I don’t deserve. I graduated from the Citadel with a Political Science Degree. I’m an industrial sales engineer, I work on robotics and conveyer systems. I make a pretty solid income as an engineer, and I make commission on the sales too. A lot of that money fuels my passion and hobby which is music, and EQ Produktions. Unless something clicks and someone picks me up, I have to cross that six figure mark for me to quit my day job. I have lots of flexibility, I work from home and write my own schedule. You should see my office, it’s like work and play. A studio and an office. Lots of cool shit in there.

Vice recently published an article which said that the current and upcoming generation of DJ’s are more skilled in marketing and promoting than the actual art of music production. What are your thoughts on this?

Alex: I saw the headline, I didn’t read it. But I think it’s true. Personally one of my weaknesses is self promotion. I don’t promote or market my page, I have stickers and that’s it. I have seen kids come and go and blow past me, I’m not jealous. They just sell themselves, put themselves in front of the right people. They do the marketing thing right.

Elliott: It’s also a matter of time. It takes time to do all the things it takes to market yourself and spread yourself around. Working a full-time job and hitting gigs just takes a lot out of you. It’s tough. I think it’s brilliant though, if you can market yourself.

Do you think that’s bad for the music scene?

Elliott: Some of these European cats man, their music is top-notch, it’s tits, spot on. They don’t market or anything in America.. but it’s blown up. I think good music sells itself, man. It’s like drugs, they sell themselves. Stuck with more drugs than you wanted? Don’t stress, somebody will buy that shit. If the product is good, it sells itself.

What do you guy think of Model DJ’s… pretty faces on the decks who just stand there.. minimal talent.

Alex: He definitely uses some premium shampoo, he reminds me of Hansel from Zoolander.

So are you guys more comfortable on the stage or in the studio?

Elliott: The studios a good time man. I don’t think we all know exactly what we’re doing in the studio as much as we do on stage on the decks, but we figure it out. We’ll have an 8 hour session where we fuck with sounds and stuff.

Alex: We pride ourselves coming up with the wittiest shit on the fly like random bullshit. We were just chillin during a studio session, we call it brunch beats, I make some brunch for everyone cause I love to cook. We were hanging out quoting one of my favorite movies “The Mask” when he goes, “P.A.R.T…. Y? Because I gotta.” So were like holy shit, we gotta sample that! So we went and found it online and it just worked perfectly.

So I guess to answer the question fully, it comes down to time. I have my job, he has his. some of these younger guys have a lot more time to figure shit out in the studio. We’re not bad in the studio, but we aren’t as comfortable as we are on stage. It’s a constant learning process.

If you guys were planning a heist who would play what role?

Alex: Like a power bottom? Orrr…what??
Ink: No, like ocean’s eleven type shit.
Elliott: I’d be the player, he’d be the planner. For sure. I’m the doer. I’m the livewire nigga.

Who else would you add to your crew?

Alex: The homie Phil Dice, he would be logistics.

Elliott: Joey my cousin, he’d be in there. Jerry, AKA, it doesn’t matter.. he can handle his shit. He’d be a getaway driver. Him and I swapped seats while driving back from U Street Music Hall doing like 80mph. We had 3 people in the backseat just crying in fear.

Ink: What’s your guiltiest pleasure you’d be willing to have published?

Alex: I love The Notebook, man. It makes me cry every time. I swear to god. I’m real southern, Nicholas Sparks he gets me every fucking time. Dear John, The Notebook…they’re set in Charleston, SC….One of my all time favorite cities, I went to college there. I love it.

Elliott: Man, I’m having a hard time thinking of one.

Alex: Is it the finger in the butt?

Elliott: That’s a good one. That’s a contender for sure. I think it’s just like real sappy girly R&B alone in the car. Some super deep Erykah Badu type shit. I’ll really fem out. I’ll get into some real sexy sappy emotional music. Straight up, I’m swervin, my neck has more attitude than anything else in my body. I get busy in the car, four corner snap and everything.