Appetite for the Grotesque: The Art of Dumpster Diving

Contrary to popular to belief, trash can be delicious. Trash can delight and fulfill. The act of foraging alone can induce states of moderate to high euphoria. My curiosity and fondness for all things cheap lead me to explore the nether areas of decrepit Richmond trashcans. 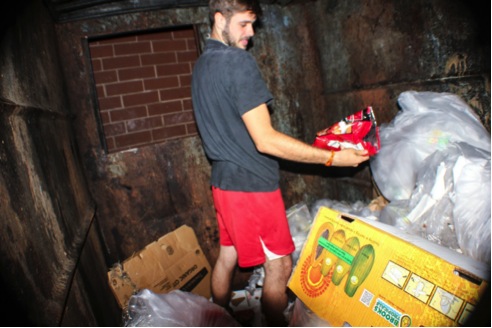 Wide-eyed in vigilant anticipation, I rummaged through the dumpster searching for some delicious morsel, or maybe not a morsel, maybe something greater. With the dexterity of a heart surgeon, bags were torn open and infiltrated, careful to keep at least one hand clean in case something delicious presented itself. I delved deeper down, into that barren wasteland in pursuit of forgotten merchandise. It was here when another man’s trash became my treasure. 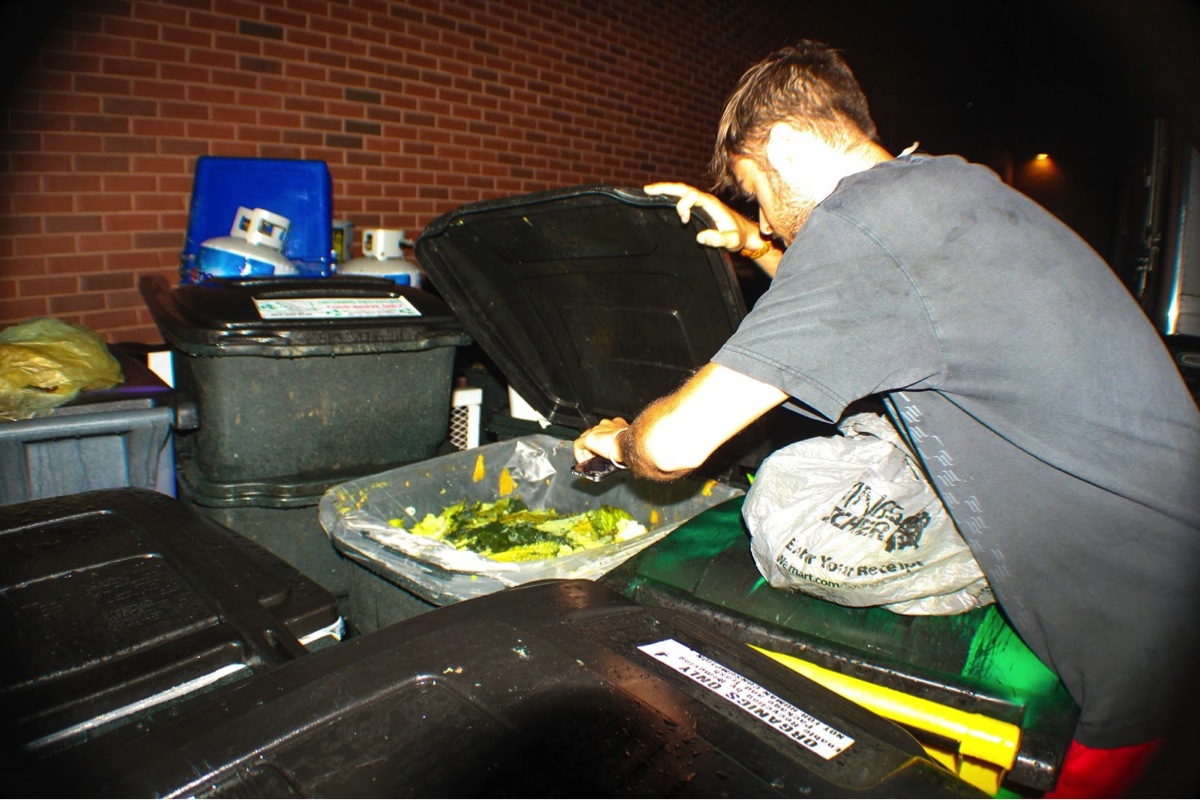 Some may say treasure is too strong a word. Many do find treasure though; I found a Jersey Mike’s Sub. Wrapped up in the logo emboldened paper the crisp, golden brown bread beguiling a soft delectable underbelly, cradled the prized possession: steak and cheese. This culinary masterpiece was topped off with heaps of onions and peppers. Copious amounts of mayonnaise provided the lubrication for each savory bite. Like clockwork, my salivary glands kicked into overdrive.

Yes, you can find delicious food in trash cans. I’ve found grass-fed steaks, organic eggs, tens of pounds of organic fruits and vegetables, guacamole, dates, and more. Dumpster diving can be hit-or-miss, though. I’ve walked away with six or seven grocery bags of stuff some days, and other times only a couple cans of coconut milk. 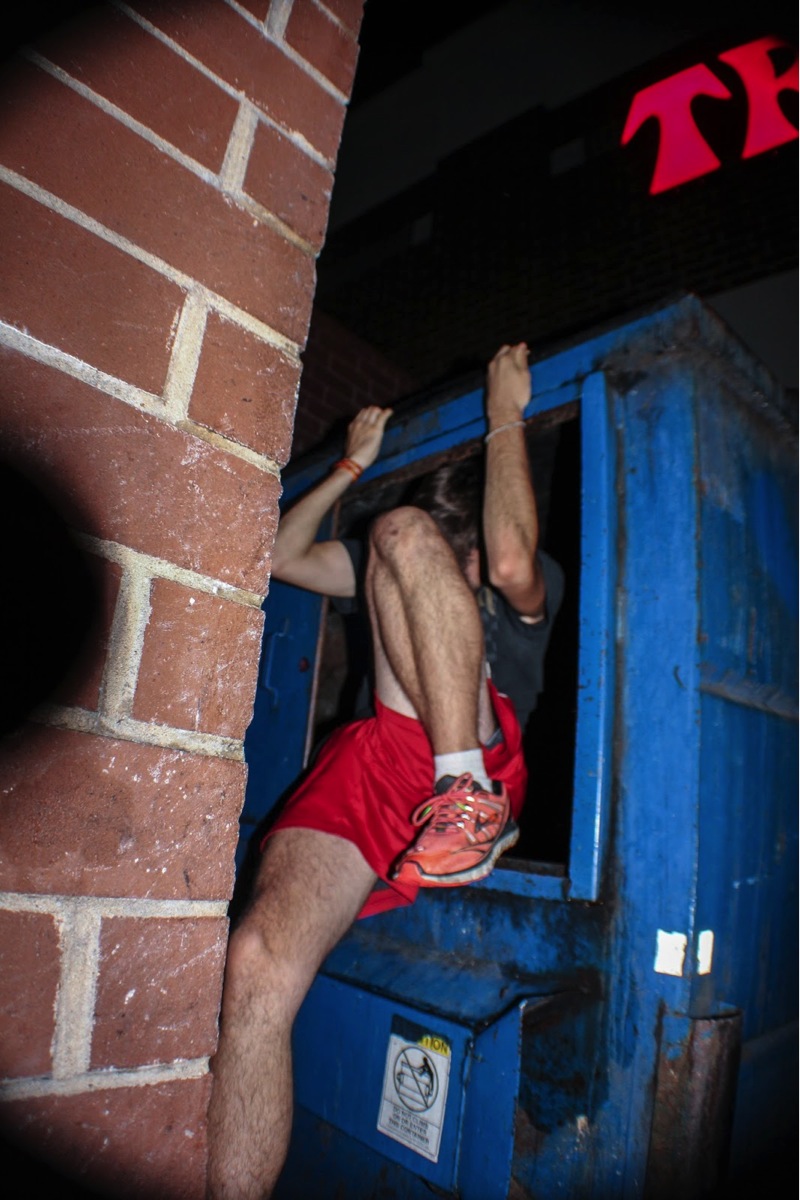 Dumpster diving is not just for the poor or the desperate. It’s not for the downtrodden. While many that do engage in this activity could be described with those adjectives, dumpster diving is for the resourceful – those that recognize the potential value laden objects buried within a receptacle that typically functions as a place to deposit, not withdraw.

While dumpster diving is something you can literally jump right into, you don’t have to; you can ease yourself into to it. The act of performing the namesake- diving, is not necessary. You can pick through carefully, just digging through what’s in the first bag on top.  You can wear gloves. If you’re feeling soft, you can go for the long rubber ones that rise up to your elbows.

As far as location goes – start with specialty grocery stores and health food stores. This is where the rich shop, and the rich like nice things. Free samples galore, a gelato bar, pristine shelves, blemish-free produce, crimson colored steaks, wild-caught seafood – it doesn’t matter if you’re a broke, ramen slurping, dollar store shopping undergrad, you’ve been here before. You’ve been to Whole Foods and Trader Joe’s, Tom Leonard’s and Ellwood Thomson’s. Here, product quality stands its highest. The standards for aesthetics are more rigorous than a Prada photo shoot on the French Riviera.

The rigor of appearance maintained at stores of this fashion extends further. If a shopper grabs two sealed packets of filet mignons, gets to the register and realizes, “Hey, I’m broke, actually. I can’t afford this,” and subsequently informs the cashier that you would like to put it back, that item cannot be sold. Management doesn’t know how long that’s been out of the fridge. That packet of succulent steak, that to me and you is tasty and safe for consumption, becomes a potential hazard, and more importantly, a potential lawsuit.

I use this example, because yes, I found two packets of filet mignons, priced $15 dollars each. Yes, they were delicious. No, I didn’t get Ebola. 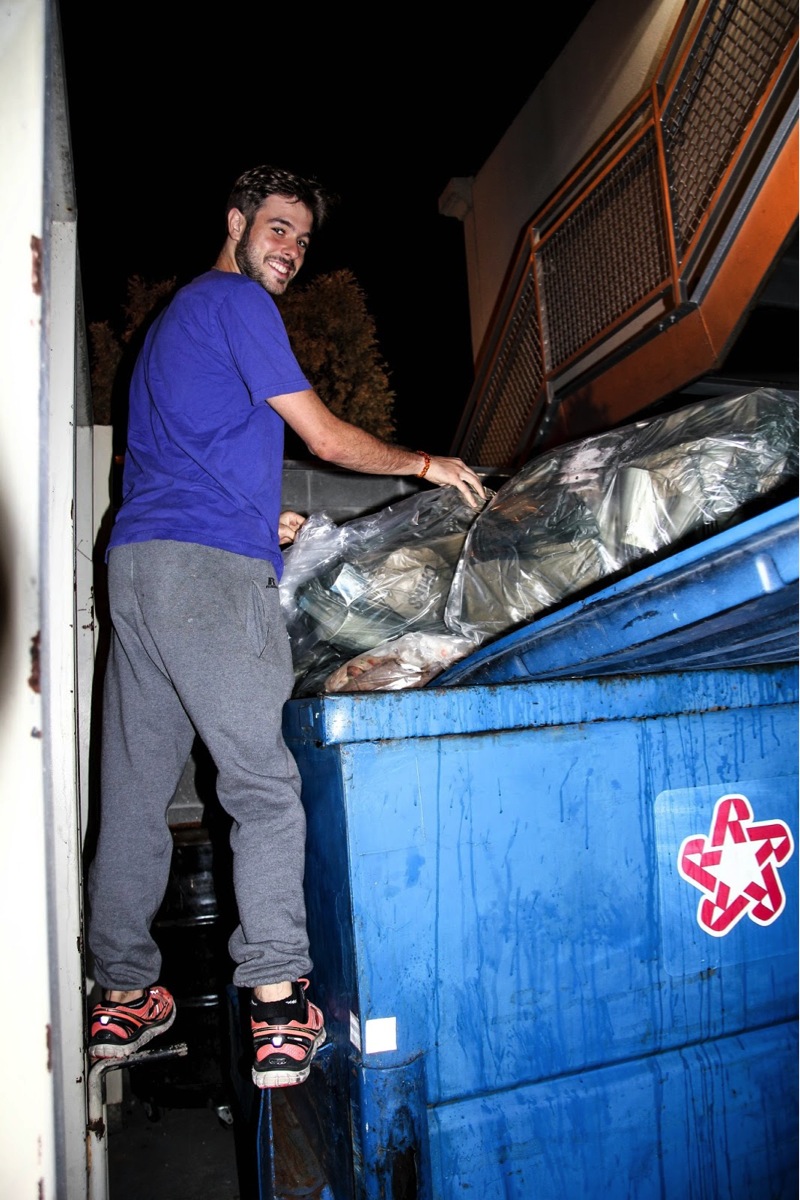 Despite this warm eulogy I’ve blubbered for the past 750 words, I must advise for the exercise of a basic amount of discretion by all would be divers and trash plunderers foraging through litter. Let’s say you find something absurdly delicious – let’s say a slice of pizza, but there’s a problem: it’s coated with a film of viscous slime that dangles several inches from the outer edge of the slice. You probably shouldn’t eat it. As my dad used to say in my adolescent years whenever a girlfriend broke up with me, “There’s more fish in the sea.” I too, echo this advice. I would say, however, “There’s more trash in the dumpster.” Don’t hang your hopes up on any one thing. 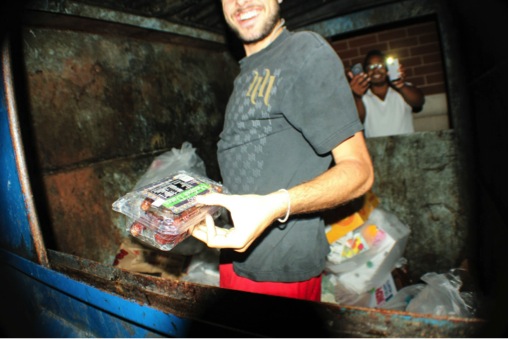 By now I hope a seed of inspiration has been planted into your mind. Most of us are broke ass college students, so let’s be real: this is a pretty solid option for living cheap. Personally, I try to get all my food from dumpsters, though it’s usually impossible.  I do end up spending only $30 to $40 dollars a week on groceries. I eat only organic fruits and vegetables, grass fed beef, and organic chicken. Occasionally I eat beans, legumes, and a Jersey Mike’s sub. These are all to be found at a dumpster near you.

If anyone tells you they just can’t afford to eat healthy. Let them know the secret. Share the gospel of dumpster diving.