A Review of Posture & the Grizzly’s New Album

Hello anybody, everybody and nobody, I’ve got good news for you. Just like every other week I found a new band to listen to, but here is the better news, they are good this time. Not to say I

only find bad music, or to say that my taste is what dictates good or bad because screw that subjective business. Anyway, we all know it is a rare moment when you check out that band that popped up on the facebook and they actually blow you away.

This week’s lovely surprise is a band called Posture & The Grizzly and the album they just released this week was entitled Busch Hymns. An enthralling punk rock album that throws nods to both the pop and the screamo sides of the genre Busch Hymns manages to carry more passion and engagement in seventeen minutes than I’ve heard in records twice as long from bands twice as popular. If the World is a Beautiful Place and I am no Longer Afraid to Die was the sad twin than Posture & The Grizzly is the angry one. 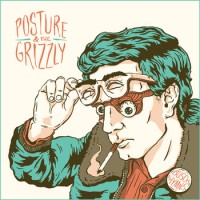 The album opens with “No Brains” which draws its listeners in with a standard bit of distorted guitar before the tortured vocals pull you into the headspace. Continuing on through several songs such as before reaching my personal favorite, a snide take on the punk scene called “Modern Punk.” It is a nice anthem to nihilism as they sing out “I’m sick of these fucking kids I got to know, all these shitty kids I’m supposed to know” and repeatedly remind us that they “don’t give a shit anymore.” Sometimes lines like these can come off cheesy or seem exaggerated for the sake of a song, but listening to “Modern Punk” you become convinced that they mean every word and somehow the cliché of saying “I don’t give a shit” manages to scrape off just a bit of meaning. To close the record we get a song called “Jordan Michael’s Space Jam.” In it Posture & The Grizzly bring out all the stops to flow through fast, and aggressive whirlwinds, then suddenly stop and hold back just enough to make you anxious before bringing in dramatic and powerful “And I want to see you smile, and I want to see you” that brings the whirlwind somehow into sharper focus even though it is gone.

Overall I will admit the album rehashes a lot of lyrics and riffs we have heard before, but they do it in a new way, in a new order, and with their own aesthetic and that is all you can ask of a genre that lacks a definition and has been around for forty years. They bring sincerity and humor (there is a song called “Egg Nog, Drunk off Hillary Duff’s Piss”) while managing to flaunt some awesome musical dynamics. Definitely a band I will be watching in the future, and you should too.