Co-Star: A Major Fault In Our Stars? 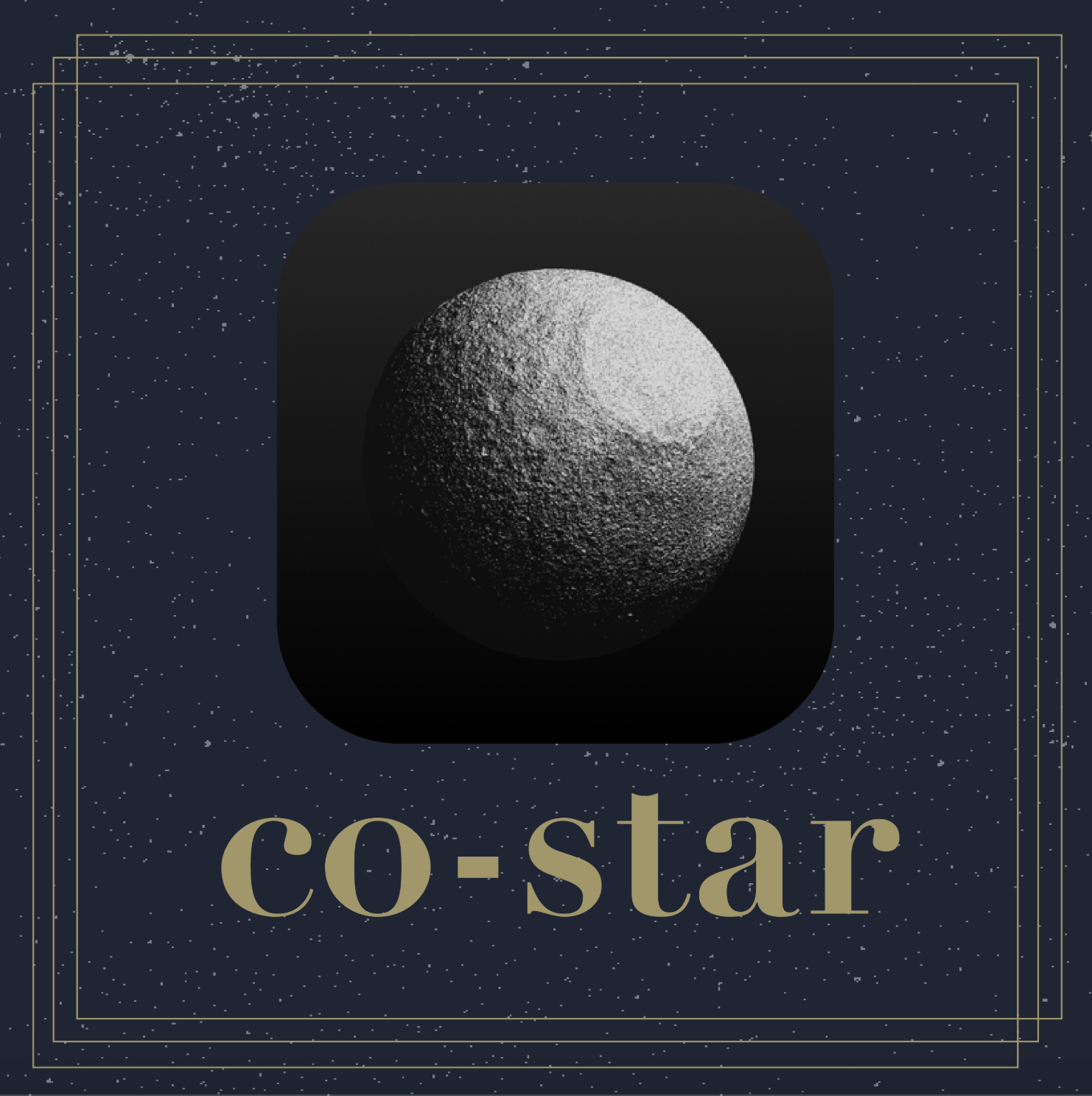 Astrology, crystals, tarot, mysticism, and the occult have recently become of interest — especially with millennials. During this re-emergence of the occult, conversations around astrology have become integral to democratic rhetoric. Most college-age students have at least heard of, or been exposed to more elements of the science than any perceived generation before it.

Weaving its way into the social fabric, astrology apps have become a point of critique in major media companies. The Atlantic addressed millennials’ interest with astrology in articles: “Why are Millennials So Into Astrology?” and “The Tender Power of Astrology Memes.” Apps have become a part of the way people understand astrology. The apps vary from concise information to flat and non-educational user interface.

One app, in particular, that has caught the eye of millennials is Co-Star. Co-Star is probably the most popular choice of the hundreds of astrology apps in the iOS App Store. Its mission is to provide “access to astrology [that] has historically been restricted—now, these predictions can be anyone’s,” their website reads. They brand themselves under the capacity to provide “Hyper-Personalized” astrology readings to anyone with the app.

Co-Star has undoubtedly succeeded in this mission; they maintain a 4.9/5 star rating on the App Store for iOS with over 69k reviews and climbing. There has been nothing like Co-Star to date. It is informative, insightful, and as most people on Instagram or Twitter will tell you, it will, quote on quote, “drag you.”

As a practicing astrologer, I owe a lot to Co-Star. Most of my clients have general knowledge about what I do or what astrology is before we even meet. People can often pull up and refer to their charts at a moment’s notice.

One thing Co-Star does not do is explain the inner workings behind a user’s chart. Most people can list off some of their placements like “I’m a Capricorn sun” but don’t actually know what it is they’re saying. So, one of the most popular requests I have gotten is, “can you explain what this means to me?” as they hand over their Co-Star chart, all flat and grey on their phone screen.

This argument applies to astrology and Co-Star. Co-Star has automatized astrology. People know about it, without knowing how the computer came to the conclusion it’s making. The app may show the user “Pluto is trine Saturn”, but a regular user isn’t going to understand what that means. This calls into question Co-Star’s attempt to make “predictions be anyone’s.” 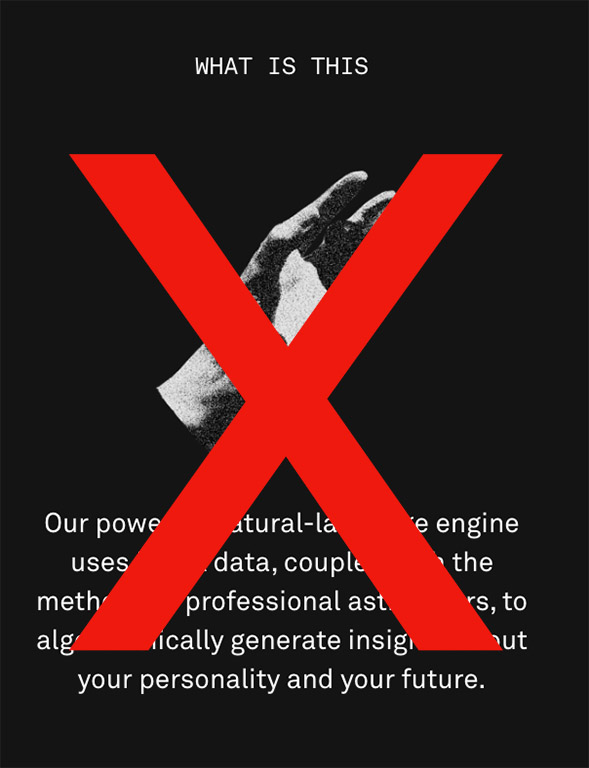 However, astrology cannot read your personality, as Co-Star claims it can through its app and daily updates. What astrology interprets is your inherent energy. Your character is a separate entity that can inform the energy within your chart.

Astrology as a tool to give insights to personality is flat out wrong information that shows up in some pretty elemental ways. This has led me, as an astrologer, to spend time in sessions helping clients unlearn “astrology as personality.”

The first key point clients often confuse is that signs or placements are inherently good or bad. This is not true. No zodiac is good or bad, they are all neutral on their own. Our personal experiences, traumas, successes, outlook, and mental wellbeing can inform how that energy will manifest in the physical world. For example, Leo is not constantly power-hungry, and Pisces isn’t always kind. In short, two of the same sign are not like each other.

Another essential piece of information astrology as “personality” has inflamed is the “rising” placement on a chart. When people talk about their astrology placements, they’ll list off their sun, moon, and rising. The rising sign is imperative to the creation of a person’s chart but is less esoteric than we like to make it. When people list their rising sign, they think they’re telling someone what the “mask” they wear is, as listed on Co-Star’s app. In reality, it is more a point of reference, a sophisticated and calculated piece of data. 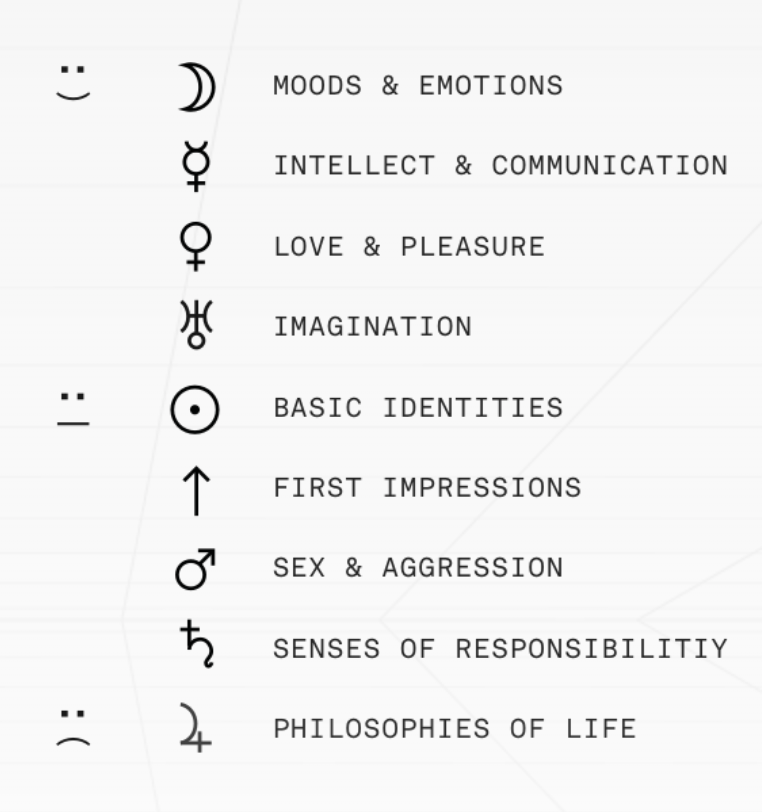 For example, you may have Saturn in Taurus in the first house which will influence the “mask” you wear; yet, your rising sign (represented by the upwards arrow in Co-Star) may be in Aries, defining your purpose. A chart is a 360-degree sphere where everything, even that which is “absent”, is influencing each other. The interface of Co-Star does not allow people to see that influence because of their app visuals and aesthetic.

Co-Star has managed to flatten the chart, reducing what was once the 3-D or 4-D bodily shape of a chart into an indexical line by line abbreviation. The container of which Co-Star currently functions, the app, much like Instagram, points the user to see themselves as non-dimensional — static. Even the aesthetic of Co-Star plays into this with their typewriter font and charcoal black and white illustrations. 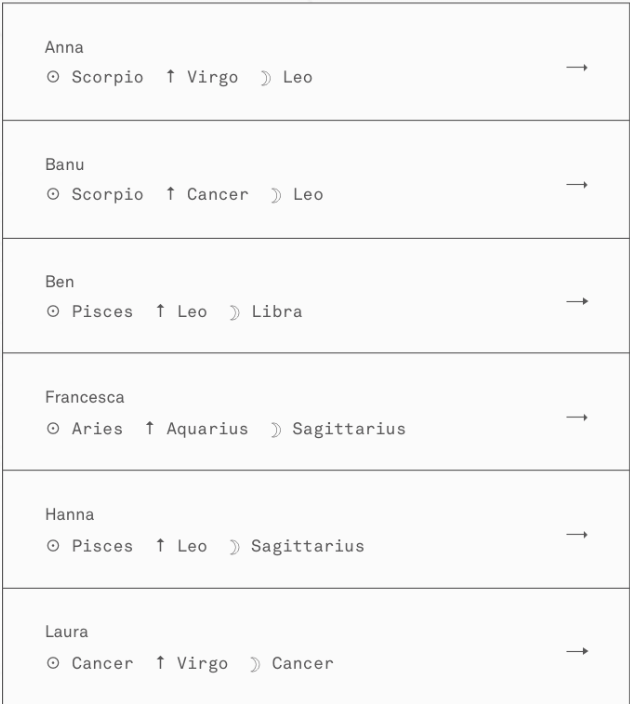 Co-Star is new though, and only one representation of astrology out in the digital world. Looking past these elements, I do think Co-Star is making significant strides, turning what was once a kitschy mythos into an acceptable way of understanding one’s self. It provides foundational access to those who may have otherwise disregarded astrology.

People do love Co-Star, and I am happy that something like this exists for the public. I just wish it wasn’t playing into bad astrological tropes or selling lousy information. Moving forward, however, I hope Co-Star can give people the real tea on the energy individuals bring to the table, without the shady marketing scheme.