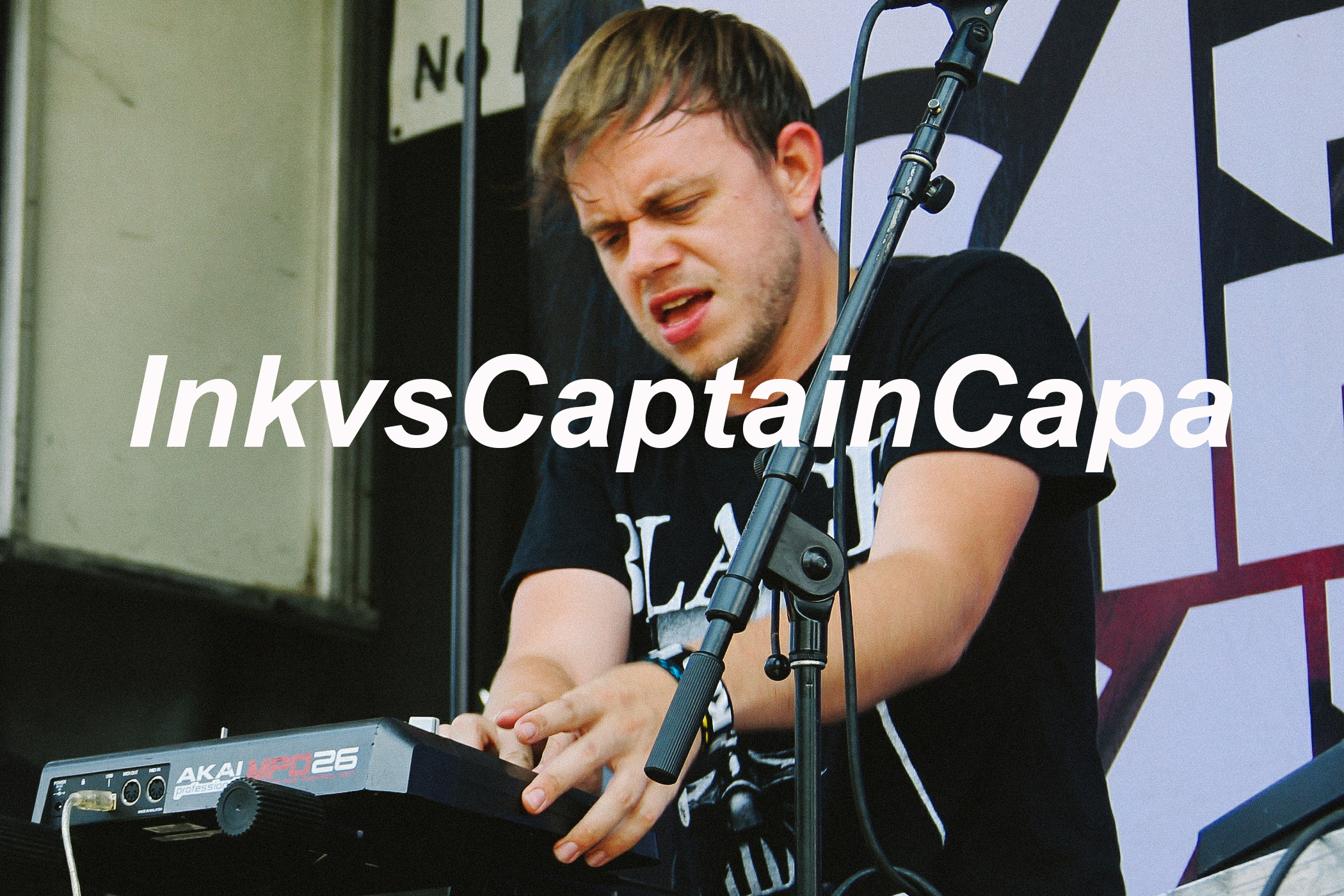 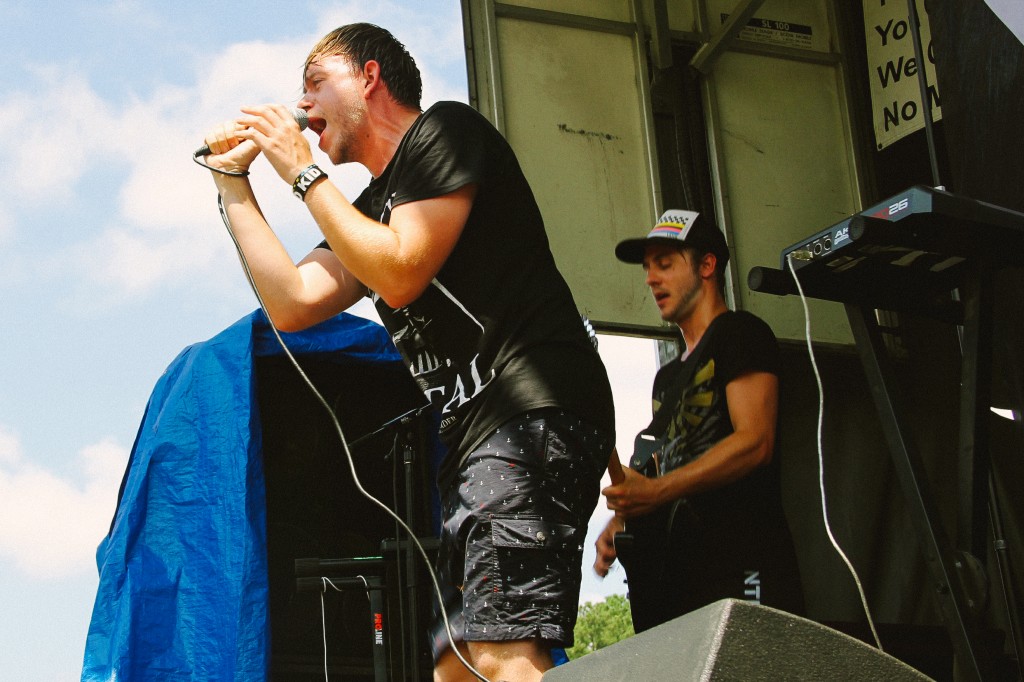 If you all read the To Write Love on Her Arms article, then you will know that INK was able to attend the Virginia Beach leg of Warped Tour this summer.  Along with talking Jason Blades of the organization To Write Love on Her Arms we also were able to sit down with several of the bands that performed on the tour as well.  One such band in particular was the German electronic duo Ashi and Maik of Captain Capa.  Being one of the first bands to play for the day we were able to sit down early with them and talk about how the tour has been treating them and how American audiences compare to their European audience.

INK:  How are you guys enjoying the tour so far?

Captain Capa: We are really enjoying it in every possible way.  It is really, really cool.

I: How has the weather been?  Has it been just all over hot, or has it been cool in some places?

CC: Oh no, the weather has been great this year.  When we were on the tour back in 2012 the weather was way worse.  We thought we were going to be hit by heat waves every single day, but it only just got really, really in the last few days, and today has been the worst so far.

I:  That’s what most of the bands usually say every time Warped Tour comes through Virginia Beach.

CC: Well this is a very beautiful place, but you just can’t leave the bus, because then you just start melting.

I: What gets you guys going each day to endure another twelve hours of heat and exhaustion?

CC: The money, just kidding no of course not.  It’s the excitement and the surprises.  Every day we never know what we are going to get.  We could have a really huge packed crowd, or like you guys say in America “turned up” crowd, but each place is definitely a new experience.

I: Where do you think your fan base is better, Europe or here in America?

CC: I don’t think we really have a fan base here in America.  I think I could count the number of true fans that we have on four hands probably.  We have a good fan base in Germany, not huge, but definitely bigger than here.  We have been building a fan base here in America and so far the welcoming we have been receiving has been very exciting.  When people come to Warped Tour to see us, we will get people who will ask us to sign merchandise for them, and that is something that we really like, to see the fans that we have already established here in America come out and be super excited about seeing us in person.  In Germany people are little bit more private, a little bit more closed off, and over here everyone just seems so open minded.

I:  What is the typical venue that you guys perform at?

CC: We started out way more electronic then we are now, so we started out trying rave parties and German discotheques, but that never seemed to work out, because we came from a background of do it yourself and punk rock.  So we may not sound as punk rock as some of the other bands on the tour, but that is where our influences come from.  That’s why we ended up playing in clubs rather than raves and discotheques.  We prefer smaller clubs where you would usually hear your favorite rock band instead of where you would typically hear our type of music.

I: What encouraged you guys to get on Warped Tour?

CC:  The fact that we both grew up with the music that Warped stands for, and when we got the offer a couple years ago to join the tour for a couple weeks it was just mind blowing to us.  This was a tour that we used to want to visit as guests and now we have the chance to perform on it with some of our favorite bands like Taking Back Sunday.  This tour we just wanted to be able to recreate the amazing experiences we had from our first time on the tour two years ago.

I: Will you guys be jumping on the European Warped Tour once this one has ended?

I: How many records do you guys have out now?

CC: We released our third record back in October.  Sometimes we don’t count the first one, because we really just did that one to do some experimental sounds.  Back then when we released our first album it was just our hobby, or what we did in our free time.  After that, music became a huge part of our lives.

I: So how do you think your sound has progressed since your on again off again first album debuted?

CC: We can’t even listen to our first record without cringing.  I know a lot of people like it and ask us to play songs from it, we really don’t want too.  As we said that album was really just for us to experiment on.  Our goal at the time was just to have one record out there on the market, just so we could have it.  It was almost like a life goal.  Once we achieved that, it was super cool, but then things got really serious.  Now that we knew how to make a record, now let’s make the record we have always wanted to make.  After our second album “Saved my Life” we finally found the sound that we as a band wanted to be, and with our latest album “Foxes” we took it a step further.  Now that we know what we want and what we can do, let’s have some fun with it.

I: After Virginia Beach where is the tour heading to next?

CC:  I believe Georgia and then Florida after that.  We are actually really excited to go to Florida, because the last time we went there we had a lot of fun.  One venue that is in St. Petersburg is literally right on the ocean and when we perform you can see dolphins in the distance.  That is one of the thing that I will never forget.  I can tell people, “I played a show with dolphins in front of me,” that is just fucking amazing.

I: What’s the plan after Warped Tour?

CC: Unfortunately we have to head back to Germany, and play some festival shows, and then we will probably take all the inspiration we gathered from Warped and these other festivals and write something new with it.

CC: We have had a lot.  As we said we wanted to recreate the memories of the last Warped Tour we were on two years ago, but it’s very unlikely that we will get the same exact experiences that we had from before.  We have had a lot of crazy memories from this tour.  One was with our last sound guy from Germany.  He had to leave the tour and we had a farewell party.  That was a really fucking amazing time, because everyone was just so “turned up” that we almost tore the bus apart.  On our second or third night we were not sure if we were going to get along with the other bands on our bus, but we wound up having this iPod party, where we just started playing these songs that we all grew up with.  After that it was like what the fuck, it doesn’t matter where we came from we all shared the same type of music growing up.  We all grew up with Taking Back Sunday and Jimmy Eats World, so we all just got shit faced on the bus and played this music all night and just had a huge dance party.  That was a really good memory.