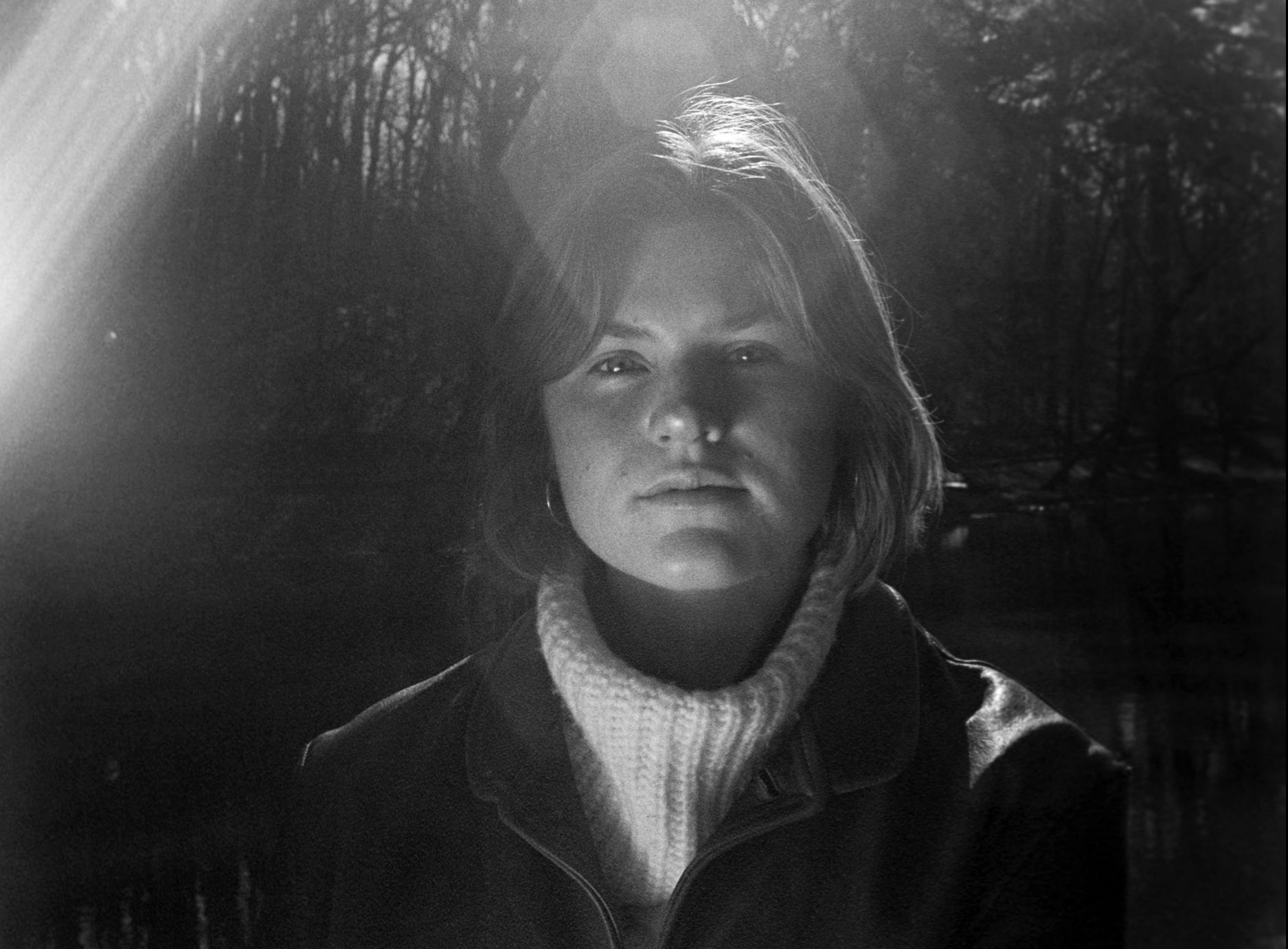 Over the past two weeks, I’ve found myself getting closer to VCUarts landscape photographer, Lily Hobart (@lilyhobartt) – a junior in the Photography + Film department.

We first bonded in September of last year after learning that we had both transferred from The School of The Art Institute of Chicago. After establishing a desire to be more connected to the wilderness, we both decided to come here. As time progresses and I work beside her in the darkroom, I’ve become increasingly enchanted by her portraits of Earth.

So, I decided to sit down with her in her apartment to talk about the importance of connecting with nature and the beauty of Earth.

Melati: First off, huge congratulations on your upcoming artist residency! I heard you’re going to be exploring the glacial landscapes on the coast of Ireland. Can you talk a little bit about what drew you to this specific location and what your work will focus on?

Lily: Yeah! So, I was drawn to that location because I’m really interested in glacial landscapes. Ireland doesn’t really have glaciers right now. That area of Ireland is just green and hilltops and covered in rock. Though, I’m going to be exploring it for the post-glacial aspect and starting my thesis work. It’s mostly gonna be me running around outside with my cameras and kinda documenting and taking portraits of the landscape, and what a landscape that was so obviously shaped by glaciers looks like. That landscape is called The Burren and it’s known for the geological formations it has that are caused by glaciers. Over there it’s much more obvious because everything is balded. There are minimal trees. It’s just extreme rocky hills where you can really see the remnants of what used to be.

Melati: It sounds like you’re really interested in that formation process. I remember you told me that you studied landscape design, but only for a semester. I’m curious, how have you continued to feed that interest and grow your knowledge in that field outside of school? How has that been implemented into your photography and artistic process?

Lily: I studied it for a semester and a lot of what we learned was more sustainable theory, which I really enjoyed, but ended up leaving because I like how in fine art you have a little bit more freedom versus design. I definitely continued to feed that interest mostly by reading. I read a lot of books and listen to podcasts that discuss these topics that I’m really passionate about, that are written and produced by experts. I think that’s kind of the basis of my whole practice. Learning about these concepts and then being so excited about them that I want to share them in a way that is maybe more relatable than reading a whole book on it or listening to multiple hours of podcasts just to get to the point. I try to shine a light on processes that happen that we all maybe know about but don’t think about in our day-to-day life, and I think there are a lot of benefits that can come from thinking about these things!

Melati: Rumors are spreading and the people need to know… Do you have a crush on mother nature? What are some of your favorite things about her?

Lily: Ah yes… it’s true! My favorite thing about mother nature and the wilderness, in general, would be the variety of it all. I’ve been privileged to spend a lot of time in a lot of different types of landscapes and getting to feel each one and see how different they are, it’s like being in completely different worlds. It’s really crazy. I’ve been in some places that made me feel like I wasn’t on Earth or where I just couldn’t fathom how regions so close to each other could have such drastically different ecosystems. Really it’s just how you’re able to immerse yourself in her and it’s this mutually beneficial relationship. It’s just fun to be outside.

Melati: Expanding on that; Why is connecting with and spending time in nature of importance to you?

Lily: Something I’ve been really fortunate to experience outside is feeling really small. Like being in such a vast landscape, or you can even feel it driving on a busy highway. You’re one part of a busy and interconnected world and I think it’s really easy to feel wrapped up in that. Spending time outside really helps me feel more connected to my surroundings versus being stuck in my head or stuck with whatever I’m busy with. It’s very easy to get caught up in that kind of loop. Being outside helps reset my mental state and makes me a much more observant and patient person than I think I would be if I was inside all of the time.

Melati: What are your favorite outdoor activities? How long or often have you been doing them?

Lily: I’ve been really privileged to have parents that encouraged and emphasized that being outside is important from a really young age. So, I’ve been able to go on a decent amount of trips and participate in recreational activities that not everyone gets to do growing up. I think my two favorites are on opposite sides of the expense spectrum. Hiking is my favorite and it’s pretty much free. You can just spend all day outside and depend on your own feet. I love backpacking too which is where you just pack a bigger bag and spend one night or multiple nights out there. You definitely get way more immersed than you do in just a day. My other favorite would be skiing. I got to take an avalanche certification course last year and learned about snow science, what causes avalanches and how to know if you’re in a more risky area and how to mitigate those risks. I’m a big fan of cold climates and skiing and snow!

Lily: Not a lot of it for fun. I moved to Virginia from Wyoming. For that, we stopped in cities just to sleep and get up and go, pretty much, but we did last summer. My partner and I went on an eleven-day road trip. We started in Wyoming and went through Idaho, all through Oregon and stopped in Hood River in Oregon, then Portland and Cannon Beach, and then went up to the Olympic Peninsula, and then up to northern Washington, then Seattle, and then into Montana where I used to live, and then down.

Melati: And that’s all in one drive?

Lily: Yeah. All in one drive and all sleeping in my car, too, except for one night and I don’t have a big camper car. That was tight.

Melati: What do you think is your favorite place that you’ve stopped at?

Lily: I think for landscape I would say Washington state. It’s just ridiculous. We went to the Hoh rainforest. It’s this old ancient rainforest. I always think of them as these tropical places that are so far away, but it’s just beautiful and everything is growing together and very alive. I’d never been somewhere like that. My favorite town that we stopped in on that drive is Hood River, Oregon. That felt like we were in Europe or something. The Columbia River separates Washington and Oregon. So, you’re basically on the edge of this river and it’s this really cute town surrounded by really intense hills and mountains and everyone there grows their own food and even their wine is local. Everything there makes it feel like a weird little storybook town. People even kite surf in the river because it’s massive and super windy there.

Melati: In the fall, you made a project about the Mycorrhizal network. Could you explain what that project was about and what your goal was?

Lily: This relates to what I was talking about earlier. How there’s a process that is known in science but maybe not widely known amongst the public. It’s crazy. People discovered that trees and really all plants can communicate with each other underground through fungal networks. If you’ve ever planted something and you rip the roots out of the ground and there’s all this white stringy stuff, that’s hyphae. Fungi essentially become a nutrient network. Some plants can survive just on the nutrients it receives from the network. It helps if there’s a group of trees and one is sick; they can all send nutrients through the network to that tree to help it. So, I did a half photograph and half digital drawing. The top half was trees above ground that were getting killed by kudzu which is a really beautiful thing we have in Virginia but it’s very devastating and harmful to the trees. Once they get covered enough in that ivy they can’t photosynthesize anymore because all of their limbs are completely covered so the leaves can’t see the sun and just fall off. Then on the bottom, I drew this underground of a giant crazy network web that shows how all these trees are still alive just to shed light on that crazy phenomenon that we’re learning about.

Melati: Being students, many of us are overwhelmingly busy all of the time. Sometimes too busy to take this kind of time for ourselves. What would you say are a few things students could do to unplug?

Lily: I’ll try to be realistic because this is really even all that I can do especially once the semester really picks up. The main thing students can do is just go on walks as much as possible throughout the week. I read a book about this. It’s strangely good for our health, what just walking can do. It boosts your motivation really quickly and your brain is a lot more active if you’re moving your body. So, walking when you have a problem or when you’re really stressed can be a really great way of trying to retrain your brain to do something productive, but not exhausting or stress-inducing when you’re feeling overwhelmed. Even walking or biking to class instead of driving could really help. It’s important to just breathe fresh air and explore new areas. There are so many spots, especially around Richmond. This is a lucky place to be.