Not Your Honey, Honey: The Epidemic of Cat-calling 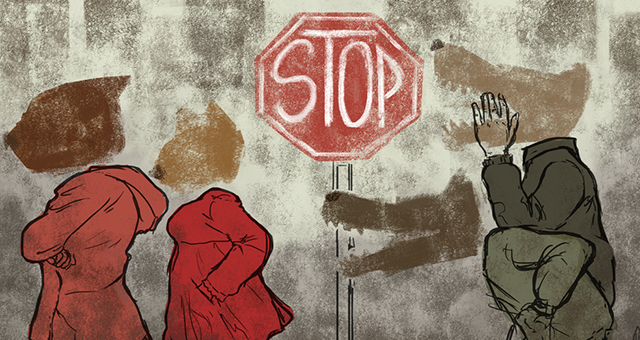 INK takes a look at one of Richmond’s dirty little secrets: Catcalling. Note: the people interviewed for this article have chosen to remain anonymous.

Catcalling is a habit that frequently gets brushed under the carpet and excused time and time again. It’s “boys being boys” or “a compliment if you really think about it” or some other lame excuse, but that’s not really what catcalling is and everyone knows it. It is a form of harassment, as one girl whom I interviewed put it “It’s sexually driven verbal harassment that women are taught to accept, and that needs to change.” And she’s right, it has become an “acceptable habit” in today’s society.

It’s taught that it’s not a big deal to catcall someone and those being catcalled are expected to accept it and take it as a compliment. Personally I have had guy friends who have told me, in the middle of me ranting about being hollered at, that I “should be flattered, they were just complimenting you.” I don’t think “Damn honey, what an ass” being shouted at you while trying to get home from work is a compliment. A quick Google search of the definition of the word compliment will leave you with “a polite expression of praise or admiration.” Polite. That little word is what frames  the entire definition.

Also, most of the girls interviewed for this article made statements on how it felt more like they were an animal being yelled at than an actual human being “[…] if they really want to compliment a girl then they should go up to them and be nice like a human and not yell at them like an animal.” I remember one time where a group of guys passed me while I was walking home from a friend’s house and one of them yelled at me “Hey snow bunny! Take me back to your place so I can fuck you.” Not even an actual snow bunny would deserve to have that yelled at them let alone a person.

Something else that is alarming is how everyone interviewed made some sort of comment about how unsafe catcalling made them feel. One interviewee stated, “Those kind of situations make me [feel] very uncomfortable and unsafe and violated.” A few commented on how when they are catcalled in a group it was still awkward but they are able to laugh it off, where as being catcalled while alone is creepy and unnerving. It’s not just the jeering itself though that induces fear in these women, it’s that they know if they ignore the catcaller and don’t reply with at least a polite smile they could be in for more unsavory name calling and possibly even stopped by the perpetrators. One girl told of a time when she was taunted by a group of guys after work while walking back to her car and she commented that “the fact that they got angry that I wasn’t paying attention to them just kind of scared me.” She also noted that they made comments of how she was being a bitch and how one of them even started to walk towards her. These situations are nerve-wracking and scary for any girl.

The thing with catcalling is no one who is whistled or shouted at really understands why the people are doing it to them in the first place. It’s not always because of the way the person is dressed, in fact many girls commented on how they were looking “frumpy” or “conservative” when they were hollered at. So why do guys catcall? Do they think we like it, or that they are going to get a number out of it? Probably not. Maybe they do it to feel more macho in front of other guys, prove they are manly enough, and maybe some are doing it to have a good laugh amongst their friends. Whatever the reason may be, all of us women would like to ask you to please stop. It makes us uncomfortable and it really just makes you altogether unappealing.

If you really want to flatter a woman perhaps actually complimenting her might work better or even trying to start a conversation would work in your favor. Even if I do think my ass looks nice it doesn’t mean I want random men yelling that at me as I scuttle home. On the other hand, if you were to stop me with a polite (there it is again, that little all-powerful word) “Hello ma’am, I just wanted to say you look beautiful today” it would be taken with a smile and thank you rather than an eye roll and silence.

I will leave this article with two pieces of advice that the women interviewed would like to share: “I would just try and explain that girls are not meant for you to exploit and to project your sexuality on! I would say think of your daughter or your sister or your mother,-any female in your family-Would you want them treated that way?” And maybe more importantly to the women dealing with this harassment, “Don’t just be quiet, it might not always be safe […] but you don’t always have to smile and play along.”