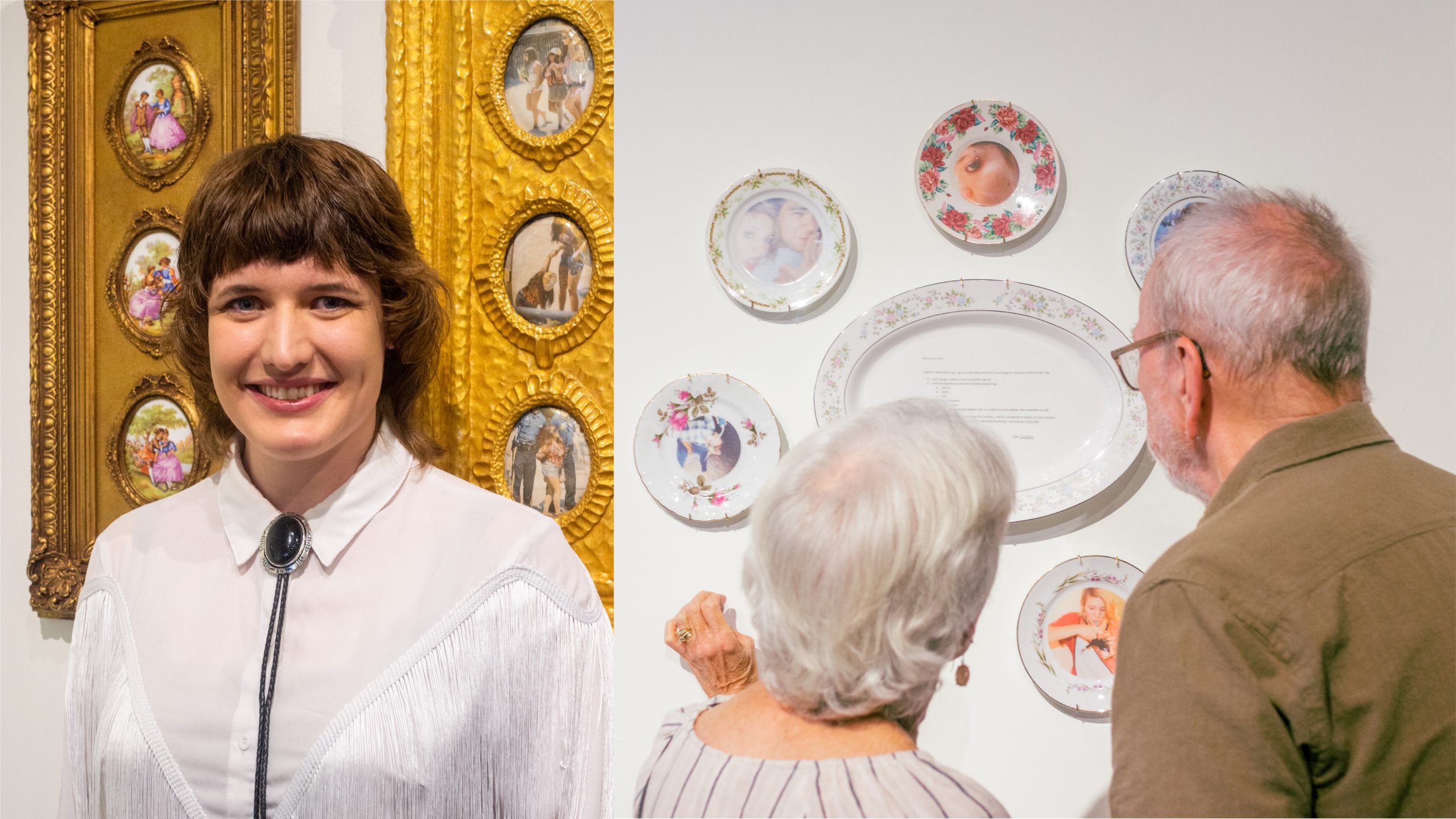 I had the privilege of attending a new art gallery showing at the ALMA’S Art Gallery right here in Richmond on September 15, 2022. The art showing is called Subconsciously Monumental and throughout the art gallery it takes you back a decade into the early 2000s teen world. While sauntering through the exhibit I felt like I was time traveling back to 2012. Which, ironically enough is the year the exhibit is based off of. Rice Evans, the artist of this show, got to give me insight into her inspiration for the exhibit in an interview. When asked what inspired her to make this show she shared that, “this summer was my 10 year high school reunion… also happened to be 10 years since the ending of Jersey Shore.” These two events played a huge role in the making of her show, and this is so evident in her work, for there are many pieces that are heavily Snookie inspired, which I loved. There are 11 pieces total in this show, but there were three in particular that really stood out to me and were my favorites; Sorry for Party Rocking, RIP Sky Mall, and Jersey Shore S3E3 Where’s the Beach.

Sorry for Party Rocking is the third piece of the show and it shows a list of rules Evan’s Mom has placed on a plate written out in contract form. It states that Evan won’t drink, smoke, party, etc, and surrounding this document is photos of Evan’s doing exactly that. I feel that this shows a very real struggle between parent and child. More often than not kids just want to feel free and like they have some sort of say in their life, especially in high school. It’s the age where you’re old enough to think for yourself but you can’t really do anything about it since you still live with your parents. “My mom did everything out of the love in her heart for me and even though I did break all her rules, I’m still here,” Evan shares when talking about this piece. I feel that this statement is a battle cry for any teen who feels trapped. It is that reminiscent feeling of wanting freedom but not being able to feel free, and I feel that she showed that feeling beautifully through this piece.

Another piece that really spoke to me was RIP Sky Mall. This piece is made from sewn material and is surrounded by a beautiful pink frame. Inside the frame there are little objects and faces of different people, and directly in the center reads a quote. This quote states, “In the clouds without borders, you held our hearts and took our orders.” I think this is a very selective choice of words to describe the time period of Evan’s high school years. The way I interpreted this quote was that we have all these options and opportunities at our fingertips yet we can’t actually do any of those things. I felt that this was a cry from a child to a parent. Expressing that “in the clouds without borders” is having all these things that one can do at arm’s length, but “you held our hearts and took our orders” describing how with love you took those away from us, because they, being parents, know the dangers of different things out in the world, they shut us out from all possibilities to explore. I saw this quote as an outcry of the time period, of feeling out of control as a teen and not knowing what to do about it.

The last piece that I found really interesting was Jersey Shore S3E3, Where’s the Beach? This piece shows a series of photos of Snooki and her friends at the beach and in the final photo she’s getting arrested. With this, the series of photos that are right next to them is a very renaissance-esque set of photos of a man and a woman together. I feel like this shows the difference between generational role models and what that says about the teens and children of that generation. When the people you look up to as a child are very wholesome and innocent seeming people; you want to follow suit. When the people you’re looking up to are people who get arrested for getting drunk at the beach; that also reflects the way you want to live your life. The paradox between the two sets of photos showed me the generational differences of teens who grew up at that time and parents who grew up way before then. The drastic difference of what we’ve seen as children v.s our parents can draw an even bigger divide, almost feeling like their ideals are as archaic as the renaissance time. Evan’s explanation of this was done beautifully and clearly through this work.

Throughout the entirety of the exhibit you get to see a glimpse of what it was like to be a teen in 2012. Evan’s portrayal of the things she saw and experienced during that time is very telling of what teenage life was then and can even sometimes feel like now. I connected to a lot of the pieces in that I understand that feeling of what it feels like to be a teen and how trapped you can feel. But even with this feeling she found ways to still have a good time, and make beautiful art out of those feelings and memories. Going to this show was incredibly eye-opening and worth the visit. If this show interests you I highly encourage any and everyone to run not walk to go see it. It will be here in Richmond until October 8th, you don’t want to miss it!