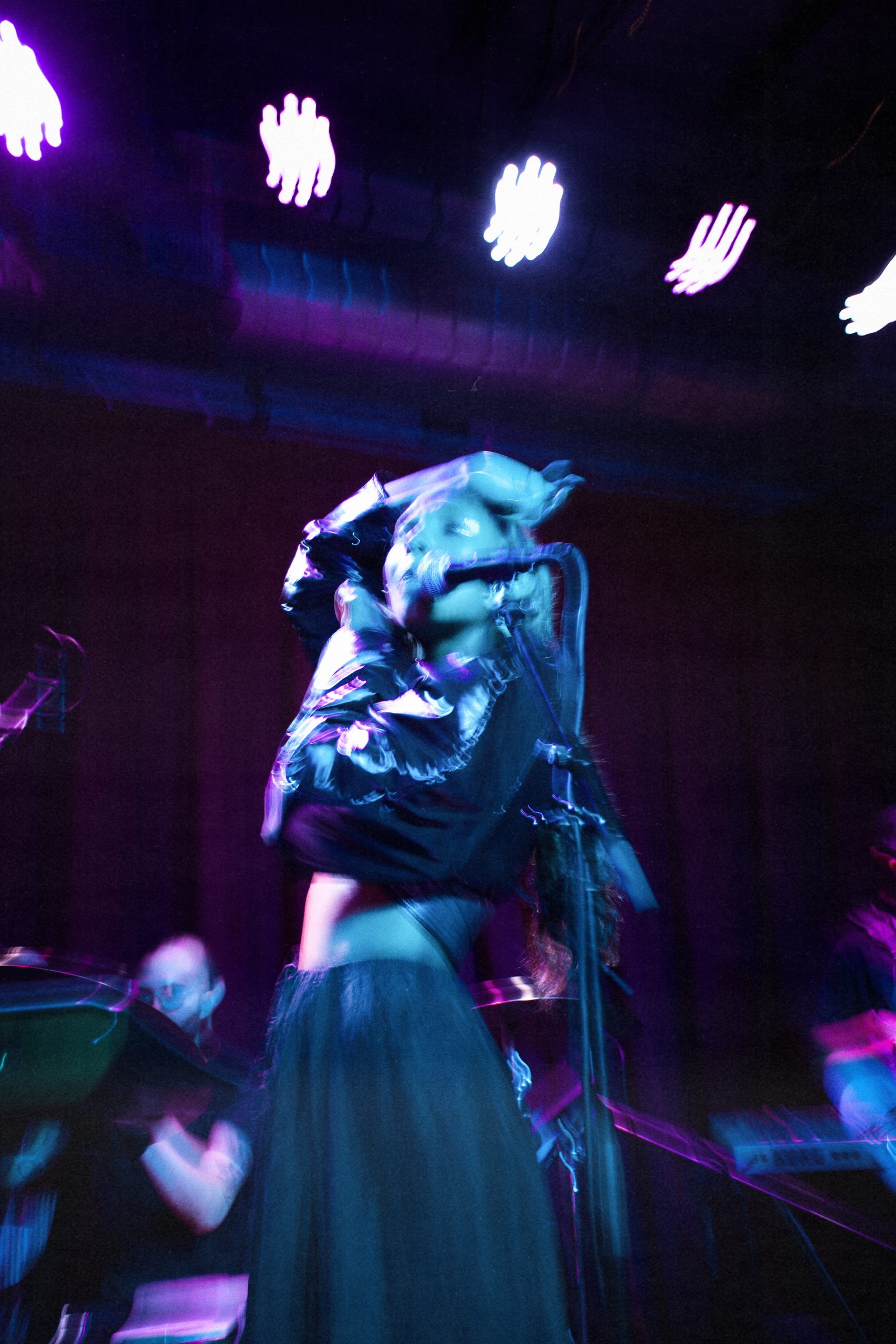 As the red curtain is drawn, the show begins. Spelling opens with a dance-ey rendition of the vampiric romance ballad, “Always.”

Singer, songwriter, and producer, Tia Cabral of Spellling, with her 6-person ensemble, takes to the stage of The Songbyrd in D.C. She brings her colorful world of sounds from Oakland, California. The opening show was a glorious set of theatrical performances of Spellling’s latest LP, “The Turning Wheel.”

“This track ALWAYS gets me. I remember the first time I heard it, driving around my hometown. It made me feel like a highschooler in the 80s, playing a cassette while driving into the sunset, contemplating my love life– or rather– what love is…”

“Turning Wheel makes me think about how we can bring little pieces of ideal society into our day-to-day life. Community, I think, is the most instrumental part of this. It is your friends, fellow artists, neighbors, the people that support you when you’re down, and those who are there to rejoice with you.

Holding a community with your people, pouring into them while they pour into you–synchronously, just like in the ‘Turning Wheel’ video. The live show was a manifestation of community as well. It was a moment for everyone to stop and smell the roses, to just have a good time with fellow Spellling listeners.”

The energy in the venue was transcendent. It was very clear that the band was ecstatic about the music they were playing, and that feeling was reflected by the audience as they sang along.

During the bridge of the song “Under the Sun” from Spellling’s sophomore album, “Mazy Fly”, blue, green, and pink lights flooded the stage as Spellling sang the lyrics “silver flashes, a new star.”

The bridge of “Real Fun,” a song from “Mazy Fly” about alien’s arrival on earth and discovery of music, we hear Spellling’s back up vocalists yell indecipherable “yeah!”s into the microphones, leading into a bombastic instrumental breakdown on the drums. This was a prime example of the attention to detail in the brilliant adaptation of Spellling’s music for a live setting.

The crowd was particularly enchanted by the song “Boys at School.” It was as though years of angst was let out in a cathartic release of energy and emotion as everyone yelled “I hate the boys at school!”

The song, “Emperor with an Egg,” begins with a synthesized melody that Spellling and the band recreated live.

Give The Turning Wheel a spin!