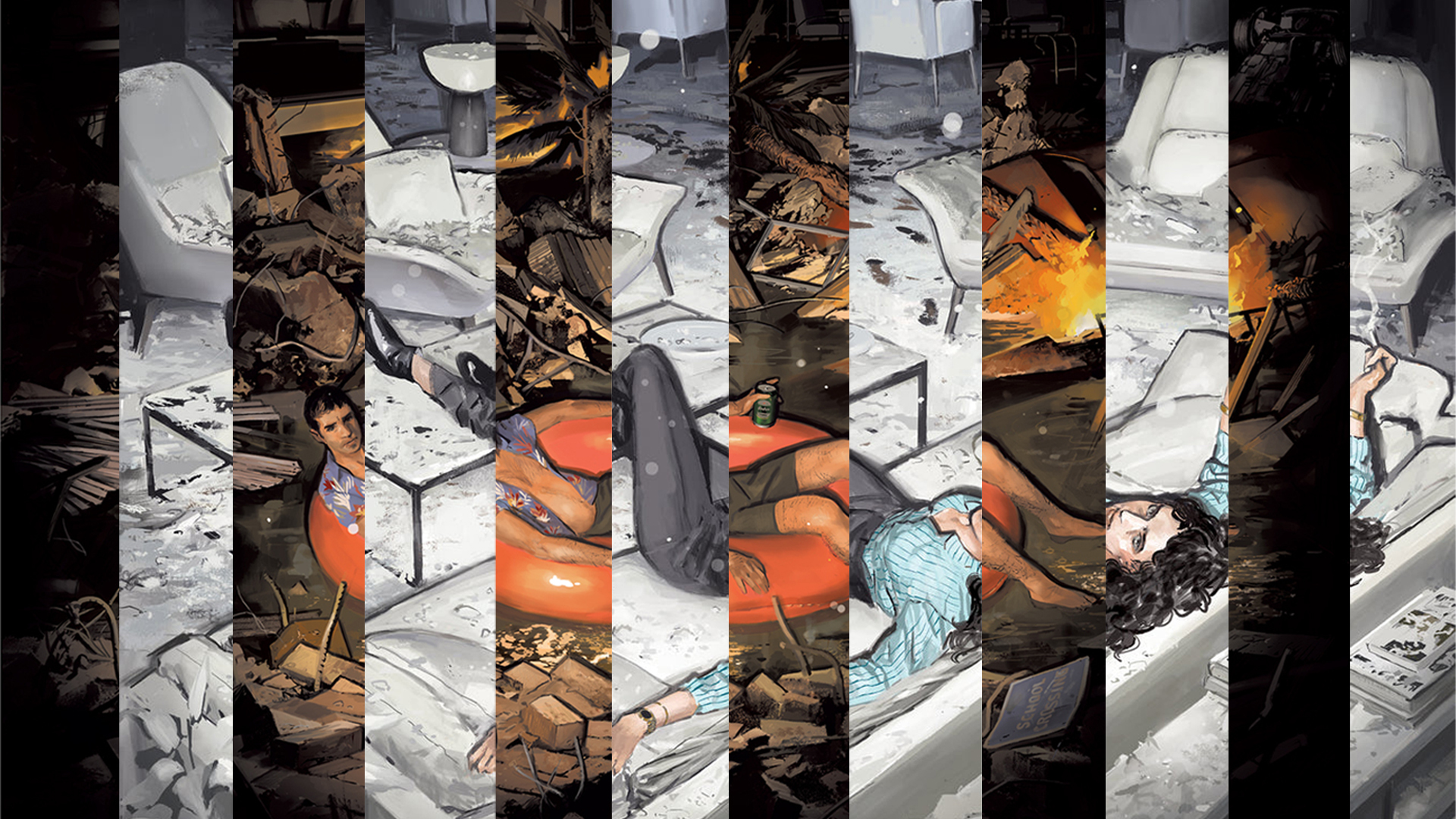 On June 1, 2021, the first issue of The Nice House on the Lake hit comic book stores. Written by James Tynion IV and with art by Alvaro Martínez Bueno, it took readers by surprise. Tynion and Martínez Bueno had worked together on Tynion’s Detective Comics and Justice League Dark, both to relative success, but this comic was entirely different from anything the pair had done before. Published under DC’s Black Label imprint, this sub-sector of the publishing company was largely known for its alternate universe or out-of-continuity stories with DC’s popular characters. However, The Nice House on the Lake was its own thing entirely. A brand new horror classic set in a world of its own.

It tells the story of ten people, some friends, some acquaintances, some complete strangers, but all with close personal ties to a man named Walter. This diverse cast has been invited to take a trip to Walter’s lake house that summer, and they arrive to find an absolutely gorgeous estate. The art creates one of the most gorgeous pieces of architecture seen in recent comics. There’s the special effects and glamour of live action movies these days, but they don’t hold a candle to the beauty that Alvaro Martínez Bueno creates on the page. It’s jaw dropping. As the cast arrives, there are reunions, some awkward interactions, but they all settle in and enjoy themselves.

As the day turns to night, our leads find themselves completely pulled in by the experience, engrossed in the festivities in front of them, until Ryan Cane, labeled by Walter as “The Artist,” checks her phone to find that it’s the end of the world. The world outside is on fire, people bursting into flames, burning to crips. In coming to this nice-ass house, these ten people have narrowly avoided the end of the world. The guests are obviously panicked. The world is ending, and they’re terrified. They have loved ones out in the world, people that they need to contact. Family, who as far as they know, could be dead right now. That’s when Ryan realizes the exact situation that they’re all in.

Walter picked them, he’d picked the day, he’d picked all of it. He’d known what was going to happen, and when confronted with this realization, it’s revealed that he’s a part of what’s happening. It was his people who are doing this to the planet, and he’d kept these ten as his chosen few to survive the apocalypse. They’d be able to live in this house, but they’d never be able to leave. They would have to live out the rest of their days in the Nice House on the Lake.

When Norah Jakobs, “The Writer,” attempts to strike him, and they’re all greeted with the intangible being Walter was. His form coagulates, almost not being there. It confuses the eye, shifting in and out of reality. They finally see the true form of the creature that, all this time, had been posing as their friend. Nora’s hand then bursts with blood.

There’s Some Horrors in this House

All art tends to draw on influences. Whether they be past creative works, or current events of the time, no movie, show, book, or comic exists in a vacuum. However, out of all works of art, nothing quite speaks to the times better than the horror genre. Playing up on the fears of the time, you can trace this back to early monster movies like Nosferatu, relying on the fear of foreigners, antisemitic imagery, to modern horror films like the 2020 Invisible Man film, a post #MeToo horror, relying on the fear of powerful men and the patriarchy that has only grown more potent as years progress. These fears can be problematic, or they can be entirely valid. Often, they can be both.

Great horror speaks to the time. It’s timely because it reflects the exact experience of the day and age, but it’s also timeless, as it puts the audience into the mind of the people who lived then. It shows the influences on the people of that day, and it speaks to their fears, desires, and their hearts. Acclaimed horror today often relies on the realities of racism (Get Out), the abuses of capitalism (Squid Game, Parasite), or other various current issues. However, no event has been more influential than the impact of the pandemic. Millions of people quarantined, stuck in their homes, it was only a matter of time before art was made to reflect that. It was only a matter of time before some of that art was horror.

Then, with the debut of The Nice House on the Lake, there was. Playing on the feelings of isolation and hopelessness that the pandemic brought on, it takes the idea of the never-ending apocalypse to a heightened, literal level. A large part of what makes this comic so compelling, is the long stretches of time, the mundanity, and the horror in that. The fact that they’re trapped in the estate forever. It shows what forever looks like. After the opening chapter, the already released issues two through six tell the story of our leads slowly losing their mind as their quarantine continues. We watch them try to cope with the situation, try to figure out how to live, and it is terrifying, tragic, and most of all, painfully relatable. It’s all of that which makes The Nice House on the Lake a fantastic comic and an incredibly compelling horror.

I think there’s a lesson to be learned from The Nice House on the Lake and many of the other great horror stories, and it’s that in order for stories to continue to grow, there needs to be change. We live in a rapidly changing world, and as such, the kinds of stories that are told about such a world need to work with that. I love horror, and there are a lot of great classic horror films, novels, and comics that, I believe, still have a lot of worth. However, society has changed a lot since then, and the time where slasher films and monster movies spoke to the fears of the people just doesn’t exist any longer. The world is so different, and the time has come for horror, a genre with one of the biggest capabilities to represent a given time, to be different too.

Slated for a twelve issue run, Nice House on the Lake returns with it’s seventh issue on April 12th. The first volume, collecting the first six issues, hits stores on March 1st. It’s a brilliant story, and I highly recommend it. If you’re interested, you can order it online, but I personally recommend heading to your local comic book store, and getting it there. It’s a great way to support a small business, and who knows? Something else might catch your eye during your visit.