I missed political punk. I missed listening to bands with a message. Bands who aren’t there just to entertain you, they are there to create dialogue. Political punk isn’t afraid to throw its views in your face and block your view with power chords and raspy vocals until you consider them. I can’t remember the last time a political punk band broke new lyrical ground, on the level that Against Me! did with “Transgender Dysphoria Blues.”

Back when I started listening to bands from the punk scene, their music really hit home. I was listening to songs that were changing my life at the time.. They were opening doors into issues I hadn’t even thought to consider at age 12, including the environment, the disparity in opportunity and general politics.

Now as valid and powerful as these songs are, you can only be told the same thing so many times. The generic “I hate capitalists and government” songs really only perpetuate teenage angst and suffer from little to no legitimate assessment of the current state of affairs.

this sense of repetition and lack of authenticity that pervaded my view of political punk in recent years. Then, I listened to “Transgender Dysphoria Blues.” While somewhat recent punk songs such as Rise Against’s “Make it Stop,” and Hostage Calm “Ballots/Stones,” have touched on matters concerning the LGBT community.

The album recounts a life of turmoil and depression both before and after Laura Jane Grace (formally Tom Gabel) revealed her struggle with gender identity to the world in 2012. The songs bring a lot of context to Against Me!’s previous work as well as carving a very solid niche in the present. The song “Transgender Dysphoria Blues” definitely attracts attention from those who may not support transgendered individuals. The songs call out what it is like to be tormented by those who disapprove and how it destroys what in another context may have been a perfectly stable psyche.

“True Trans Soul Rebel” takes a look at the possibilities for a life that are cut short due to being a transgender individual, the loneliness of the song can be heard as Laura Jane Grace calls out “You should’ve been gone from here years ago, you should be living a different life.”

Other tracks touch on different aspects of life, such as “Drinking with the Jocks,” and its splendid call out of a masculine culture that relies too heavily on gender roles.

The song “fuckmylife666” is a personal favorite. Laura Jane Grace belts one of the album’s strongest bits of lyricism, “No more troubled sleep, there’s a brave new world, that’s raging inside of me.” In an interesting change of pace the band brings in an acoustic track entitled “Two Coffins” just a couple songs before the album closes. The song laments over inevitable death and love while floating between an acceptance of the end and a forlorn denial of its stagnant state.

Collectively, these songs and Laura Jane Grace’s phenomenal presentation of them serve to question the stance of any individual who called themselves a fan of arguably one of the most popular modern punk bands. Forcing that kind of self-assessment is a powerful thing.

Thank you, Against Me!, for not only writing an abrasive and powerful new album, but also reminding me what real political punk can do and that it is still out there. 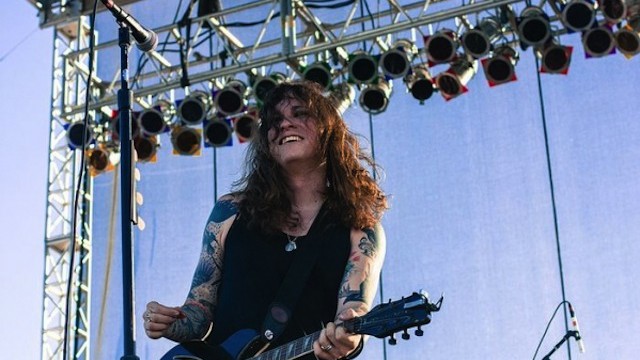