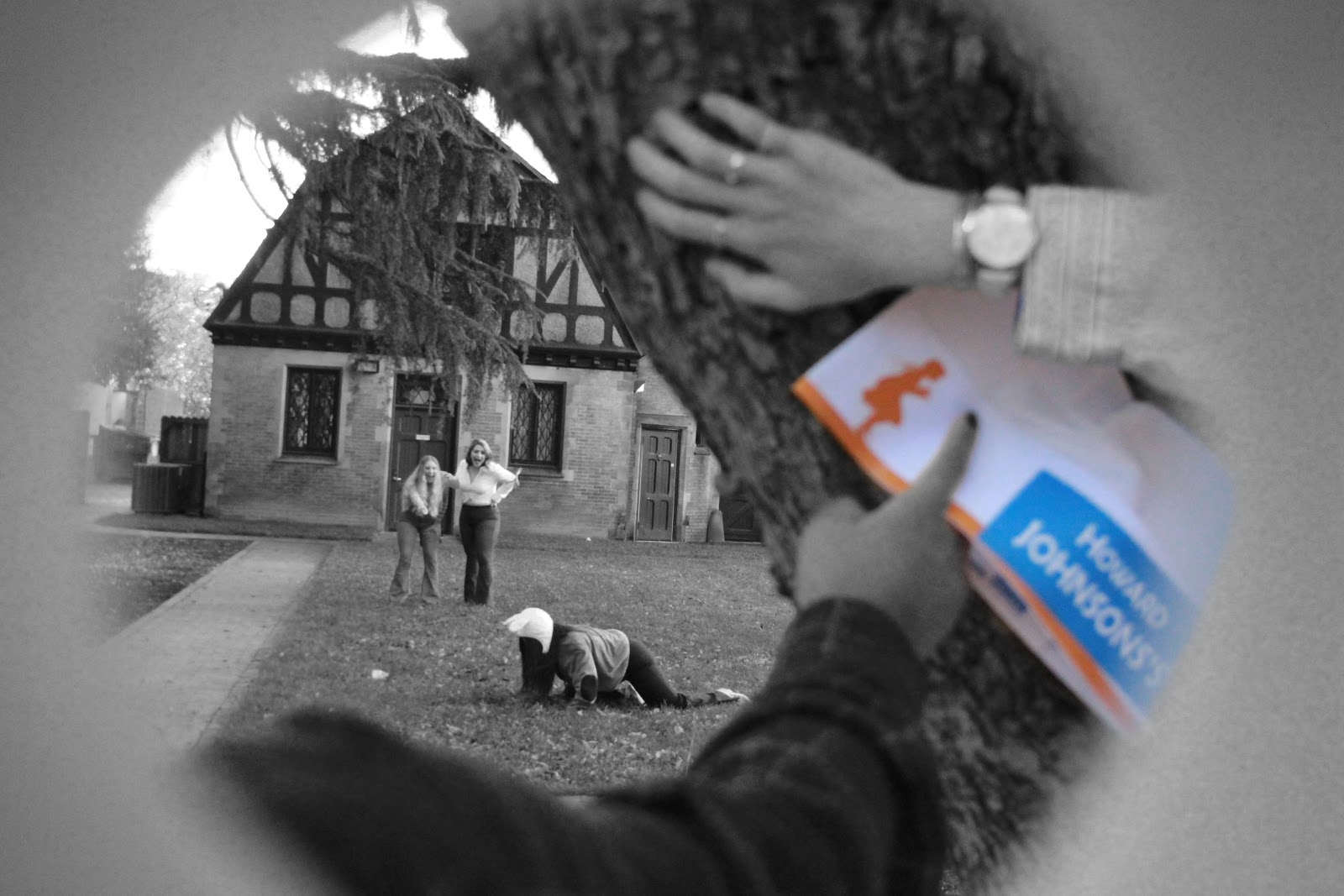 “Twyla’s Memory” is a seven-photo photo series exploring narrative elements in Toni Morrison’s short story, “Recitatif.” The four narrative theory elements explored are: the narrator’s point of view (POV), the narrator’s reliability, the narrator’s visibility, and narrative frequency. The photo series creates a visual representation of each element when it comes to Twyla’s changing memory of the events and characters behind Maggie’s fall in the orchard. There are five main shifts in her memory of Maggie’s fall, and each occurs during Twyla’s encounters with Roberta, her childhood friend.

The first photo, “Introduction to Narrator,” presents Twyla as the narrator and shows the five life stages during which her memory of Maggie is altered. Twyla is the narrator, and nothing is known about her physical appearance besides her age (which changes throughout the short story) and gender (female). She is either black or white. As such, no face or specific physical characteristics will be featured. The one thing Morrison lets the audience know about Twyla is that she is poor in comparison to Roberta. She worked at a fast-food restaurant, Howard Johnson’s, as a teenager and lives within the blue-collar working class. The Howard Johnson’s hat is a distinct possession of Twyla and symbolizes Twyla in the photos. Beginning with the bottom right hat, the Howard Johnson’s hats show Twyla’s age with a corresponding orange silhouette of a female in that age. The five ages of Twyla are: eight, early 20s, early 30’s, mid-to-late 30s, and 40s. In all of the photos, a Howard Johnson’s hat is present in the hands of Twyla to display Twyla’s clear and explicit presence in the narrative. As such, the Howard Johnson’s hats represent the narrative element, visibility of the narrator.

Beyond the first photo, the remaining photos contain Twyla’s memories from her POV. In “Recitatif,” Twyla is a first person narrator because of her use of “I,” “we,” and “our,” rather than “He/She/They” or “You.” Correspondingly, the camera angle is from the shoulder of Twyla, showing all photos from her eyeview. Because first person POV is confined to only the thoughts of the narrator, each photo has a circular rim that creates margins in the photos—visually showing the limitations of a first-person POV.

Twyla’s initial memory of Maggie’s fall is shown in “Memory 1,” where Twyla and Roberta hide behind a tree as the “gar girls” laugh at a falling Maggie. In the story and the photo, Maggie is a physically-disabled mute with “legs like parentheses,” as Twyla puts it (Morrison 2). She rocks side-to-side as she walks and wears a “stupid little hat-a kid’s hat with ear flaps.” Maggie is a cook in St. Bonny’s Orphanage, where Twyla, Roberta, and the other orphans girls reside. The “gar girls” are the big girls of the orphanage, whom Twyla names because of “Roberta’s misheard word for the evil stone faces described in a civics class” (Morrison 2). In the photo, the two laughing girls are the gar girls. They were sexually abused in the past; “Poor little girls who fought their uncles off but looked tough to us, and mean,” and implied to be runaway teenagers (Morrison 2). They are mean, bold, and wear a lot of makeup (lipstick and eyebrow pencil).

Roberta is Twyla’s childhood friend. Nothing is known about her physical appearance, besides her age (similar to Twyla’s age) and gender (female). She is either black or white. As such, no face or specific physical characteristics will be featured. The only known fact is that Roberta is rich in comparison to Twyla. She is a customer at Howard Johnson’s, goes to Jimi Hendrix music concerts, and eventually marries rich, with a chauffeur and limousine. Roberta is represented by the highest hand on the three with three rings and watch, which is indicative of her higher economic status.

In “Memory 2,” the same memory of a falling Maggie and laughing gar girls appears, but the scene is out of focus. Here, Twyla’s memory of the orphanage begins to be questioned, and Roberta’s hand is being pulled away from Twyla by another hand, showing the growing disconnect between the two as they meet at the Howard Johnson’s diner for the first time after their time at the orphanage.

During Twyla and Roberta’s third encounter at the grocery store, Roberta corrects Twyla’s memory by telling her that the ‘[gar] girls pushed [Maggie] down” (Morrison 12). “Memory 3” represents the correction in Twyla’s memory with the gar girls knocking Maggie down. Soon following, Roberta and Twyla meet again during a picket line busing protest and Roberta accuses Twyla of being the one to “kick a black lady [Maggie] who couldn’t even scream” (Morrison 16). The accusation creates another shift in Twyla’s recall of Maggie falling down, with Twyla pushing Maggie down in “Memory 4.”

Finally, during Twyla and Roberta’s fifth encounter, Twyla tells Roberta that although Twyla did not push Maggie down, Twyla identified with Maggie’s inability to fight back (in this case, against Twyla’s mother). This is evidenced in the line, “And when the gar girls pushed [Maggie] down, and started roughhousing, I knew she wouldn’t scream, couldn’t—just like me…” (Morrison 17). As such, “Memory 5a” portrays Maggie and Twyla both being pushed down, and “Memory 5b” overlaps Maggie’s hat and Twyla’s Howard Johnson’s hat to create one fallen person.

Directed through Twyla’s POV, the photo series aims to capture every shift in Twyla’s memory concerning Maggie’s fall, and each shift in memory highlights Twyla’s inconsistency as a storyteller or unreliability as a narrator. The combination of Twyla’s first-person POV, explicit visibility, and the repetitive nature of one event allows for great uncertainty regarding the “truth” of the narration. This allows Morrison to place an ironic distance between the story and the audience, prompting the audience to reflect upon Twyla’s character, background, and actions before making a judgment. Morrison effectively utilizes narrative elements of perspective, visibility, and frequency to force the audience to question the truth behind memories and reflect upon their own understanding of power dynamics and relationships in society. 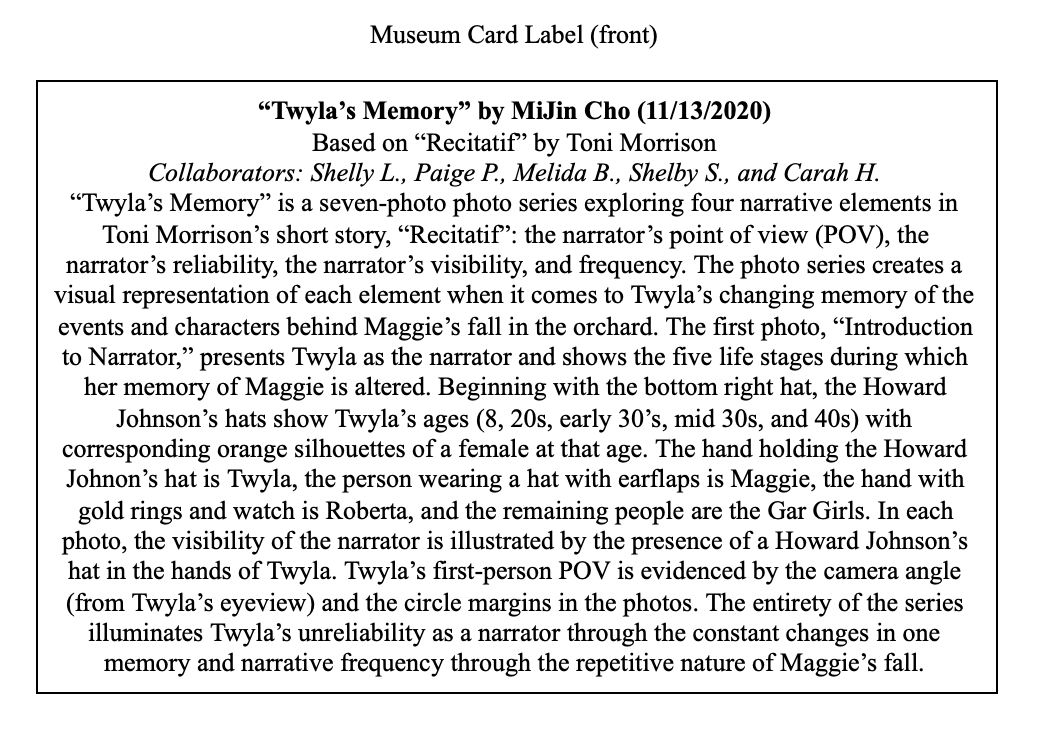 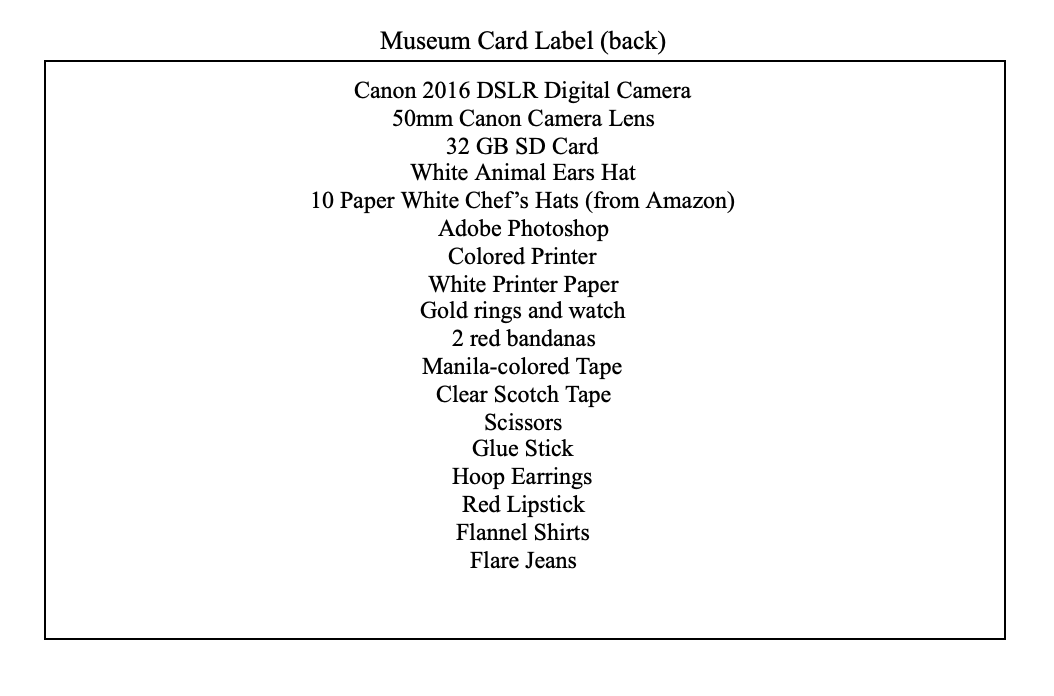