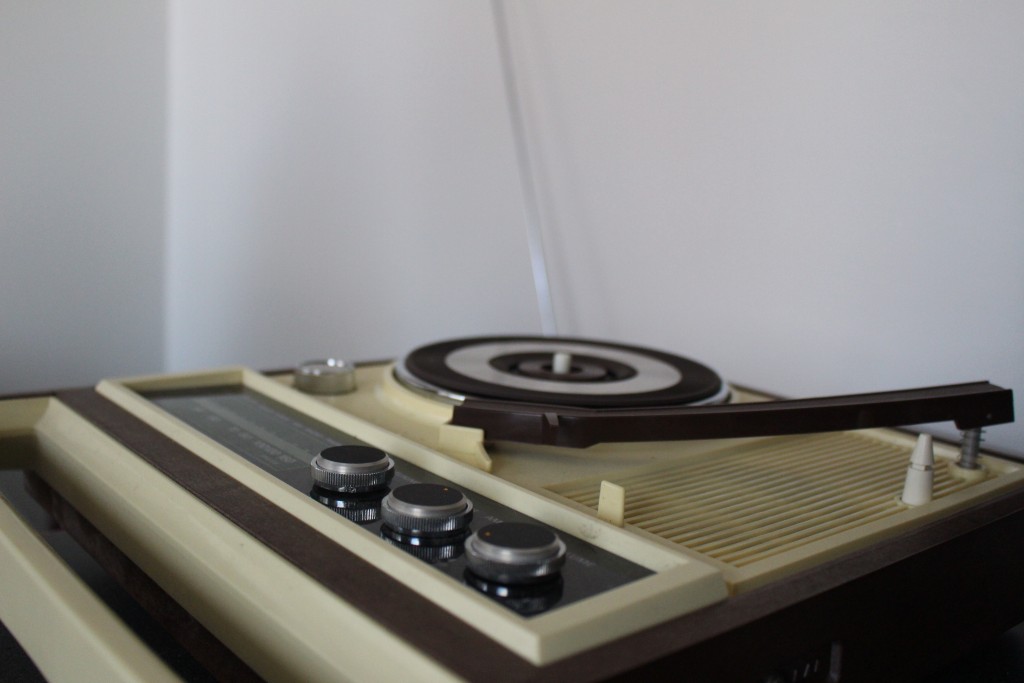 Vinyl seems to be making a huge comeback during the 21st super age of technology. It’s so easy to just go on Spotify, SoundCloud, or Pandora and listen to your favorite artists—it seems like it would be useless to actually spend money on music, let alone equipment necessary to play it! Record players, or as they were formerly known as gramophone records, got their start back in the 19th century. Vinyl hasn’t died out since then. In America, vinyl sales have increased over 220% since the beginning of the decade. There’s something about the sound of authentic music surrounding you, the vibes it gives off that make people feel warm inside. Vinyl brings a feeling of nostalgia. For some people, their life revolves around the feeling that listening to a record gives. From a rock n’ roll enthusiast to a death metal fanatic, these two vinyl lovers have two very different collections, but share a passion for the crackle of music.

When did you start collecting records?

Augstine: I started about four years ago.

Why did you start collecting records?

K: Well, I got into a lot of older music and my dad had given me his cassette collection and I really liked it, so then he decided to give me his record collection and he fixed up his old record player for me and then I started buying records of my own!

A: An uncle of mine took me to my first heavy metal concert and it was a band called The Sword and after the show I was just at the merch stand and I saw that they had their new album for sale on vinyl and it was just 15 dollars so I thought, “Why not?!” I didn’t actually own a record player at that point but once I did it’s kind of an addicting thing, I just started buying lots of records after that.

When did you get your first record player?

K: Well, it had been in the attic all my life, but it was installed in my room October 15th 2011 the day of my freshman homecoming dance, so I listened to records for the first time while I was getting ready for the dance. 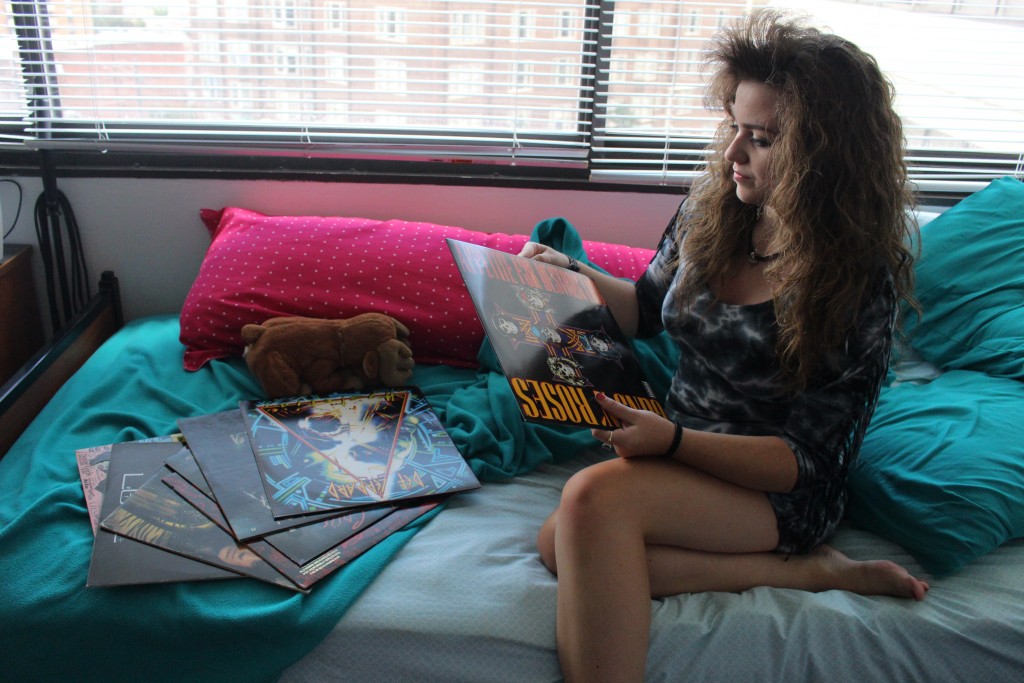 How did it feel listening to records for the first time ever?

K: It was really exciting for me cause to me records are the most intimate way to listen to music as opposed to listening to it on the computer. With a record you can look over across the room and see every groove of every note right there in front of you and hear the warm sound coming through the speakers—it just feels really deep.

How many records do you own?

How much money do you think you’ve spent on records?

K: Fortunately, a few people have found out I have a record collection and they’ll just give me their old records, so I got a couple hundred records that way. I’d say between what I’ve been given and what I’ve bought, I have a couple thousand dollars worth.

What has been your best find?

K: Let’s see—I was really excited the time I found this record by a surf rock band called The Ventures and I saw it and I was like “Oh! The Ventures!” and then I noticed it was in Chinese! So I bought it, cause it was only 6 dollars, and then I brought it home and I pulled it out and it was on orange vinyl! I looked it up and found it was an original 1963 Taiwanese pressing.

A: My rarest record is definitely the one I mentioned first, Fallen Angel of Doom by that band Blasphemy.

Where did you find that at?

A: That one I actually had to get through a trade because I didn’t have just, you know, 500 dollars that I could drop on one record so I had to trade almost 20 LPs that I already had for that one, so that one is pretty special to me. I actually keep it in a safe deposit box!

Where do you usually get your records from?

K: Usually in Richmond I just shop at Plan 9. I’ve been to Deep Groove a few times. Plan 9 you can usually get some good deals, but my favorite shop ever is at Virginia Beach, it’s well worth the drive, it’s called Vinyl Daze. They have really good service there and the guy there knows me and as soon as I walk in the door he knows what I want and goes in the back and finds all these records!

A: My main source is a store called the Vienna Music Exchange; I’m from Nova so it’s just like a 10-minute drive from Falls Church, which is where I live. It’s this really tiny little record store—it’s maybe 12 square feet, there’s barely any room for the cash register, and it’s just all heavy metal records so I spend a lot of time there. Outside of that, I actually don’t pick up that many records at shows like I used to, but that was another way I did get records. But then probably the biggest source is just ordering them online and I really like doing that because with the underground metal scene a lot of the labels are really small so you get hand written thank you notes from the band members and stuff when you order their record so that’s pretty cool.

And what has influenced your music style—I’ve noticed you (Katie) have a very 80’s style, where does that come from?

K: Well, it started when I watched Back to the Future that I started to like a bunch of 80’s things. Then I started to listen to 80’s music and 80’s rock and then one day I looked up Van Halen, cause I’d seen the name in my dad’s cassette collection, and then from the day I found Van Halen I’ve just really been into rock n’ roll. They just reignited a love for music that I had as a child and it was just all downhill from there with records, concerts—all my money went to rock n’ roll. 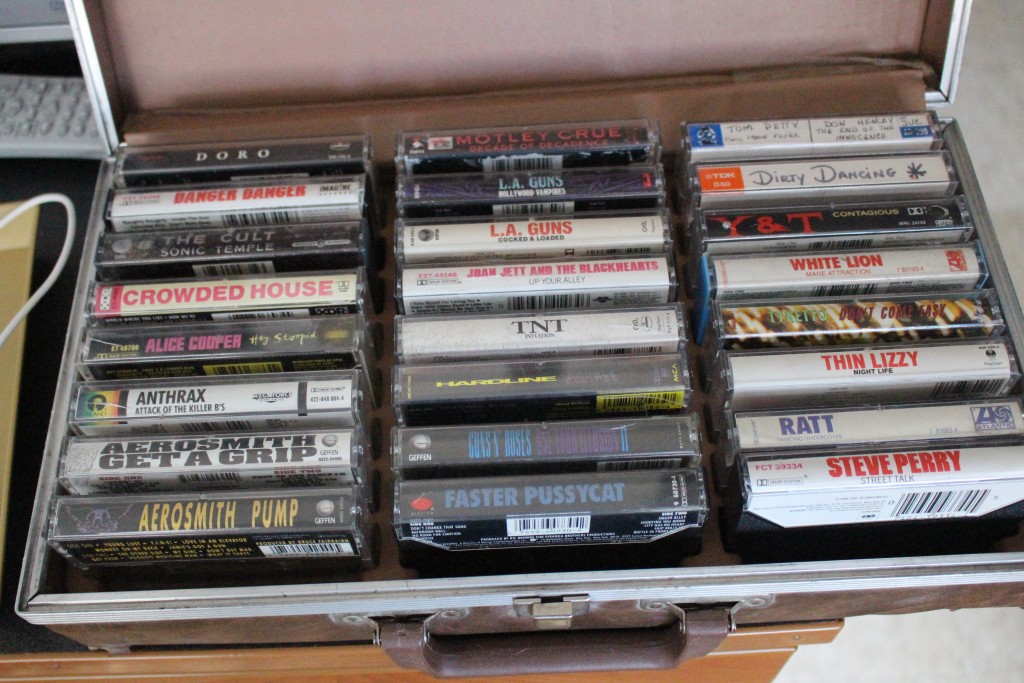 What are some of your favorite rock n’ roll bands?

What’s your favorite concert you’ve been to?

K: Probably Van Halen because they’re my favorite band and there’s just nothing like seeing your favorite band live. I actually saw them a couple weeks ago and I’d been waiting 3 years for the concert because I’d bought tickets in 2012 but the concert got cancelled. So I’d been waiting and waiting for them to come around again and they finally did!

A: Every year I go to Maryland Deathfest, which is this four day long festival in Baltimore that has heavy metal bands from all around the world. I know people who travel from Australia and Brazil just to go to that. I’ve definitely seen some of my all time favorite bands perform there. In Richmond I’ve been to a few good shows at Strange Matter. I saw one of my favorite bands called BAT who are a Richmond local band and actually, next year I might be heading to Germany to see a festival called Nuclear War Now! Festival, which is put on by an American label, but it’s every year in Germany and it’s a lot of awesome bands so I’m definitely planning on going there. 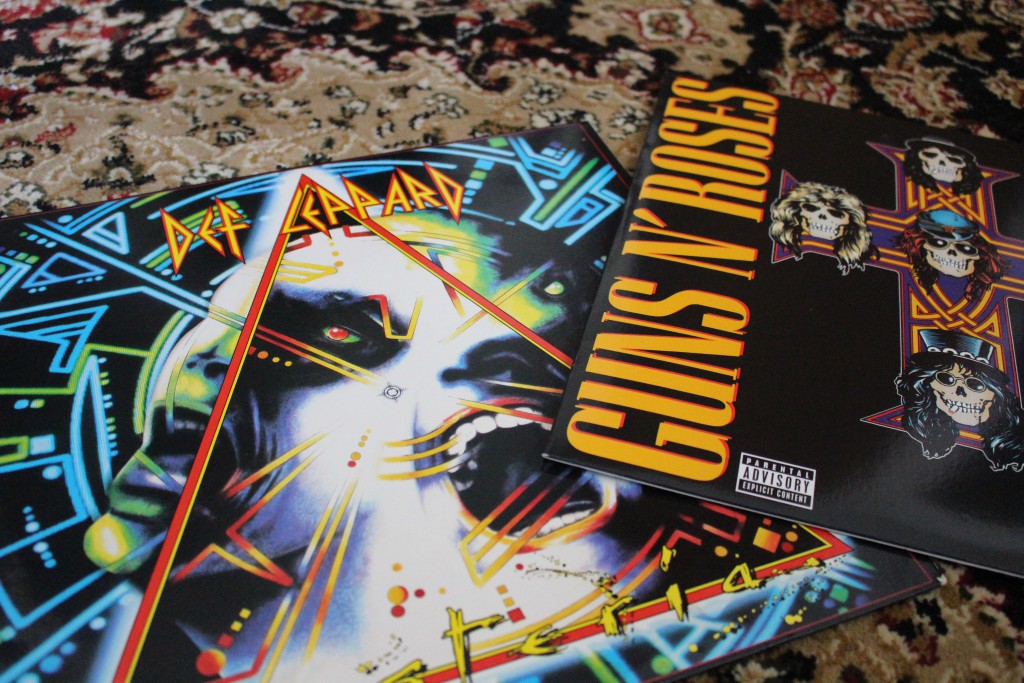 Do you have any local bands to suggest?

A: In Richmond, Inter Arma is a really talented heavy metal band that I’ve seen a few times, but I’m actually not as well educated in the Richmond scene as I liked to be. I’ve been to plenty of house shows and stuff but at that kind of thing you usually don’t get the band’s name because it’s more of just a party.

What are three of your favorites in your collection?

A: So, I collect a lot of underground heavy metal records and so a lot of them were released back in the late 80s or early 90s on really limited print runs, so a lot of those records are pretty expensive and hard to find these days. So my top three . . . number one is a record called Fallen Angel of Doom by a band called Blasphemy—I think on eBay it sells for 500 dollars. Then after that would be a first pressing of an EP by a band called Hellhammer; the album is called Satanic Rites. And then after that I have something that’s called a test pressing and a test pressing is a special edition of the record that’s only given to the band members before the record is made for sale to the public, so I have a test pressing and it’s called Sanctus Diavolos. A lot of the underground metal bands draw a lot of their imagery from anti-religious sentiment so that’s why you see that kind of thing!

If someone were to come into your room, what would you most likely be playing on your record player or what have you been playing recently?

K: I listen to a lot of stuff…. probably The Rolling Stones’ – Some Girls.

K: I think partly because it’s trendy that is what is driving the initial “Oooh, I should get a record player!”, but I think as people get the record player and as they start getting into the vinyl they really start falling in love with it and so I think it’s starting as a trend. but it’s spawning some true vinyl lovers because of it.

A: I definitely think that’s the case for some people. To be honest, that’s how I kind of started out, but obviously I got a little bit carried away and so now I look at it a little bit differently. But you know, if somebody wants to buy some vinyl records I’m not gonna tell them no, but I guess in some ways it does bother me that some people might do it for face value just because I’ve spent a lot of time developing and expanding my collection. Overall I think it’s a good thing because the uptick in the trend of purchasing vinyl helps the band, it supports the industry in a different way than just downloading the music does, so overall I think it’s a good thing.