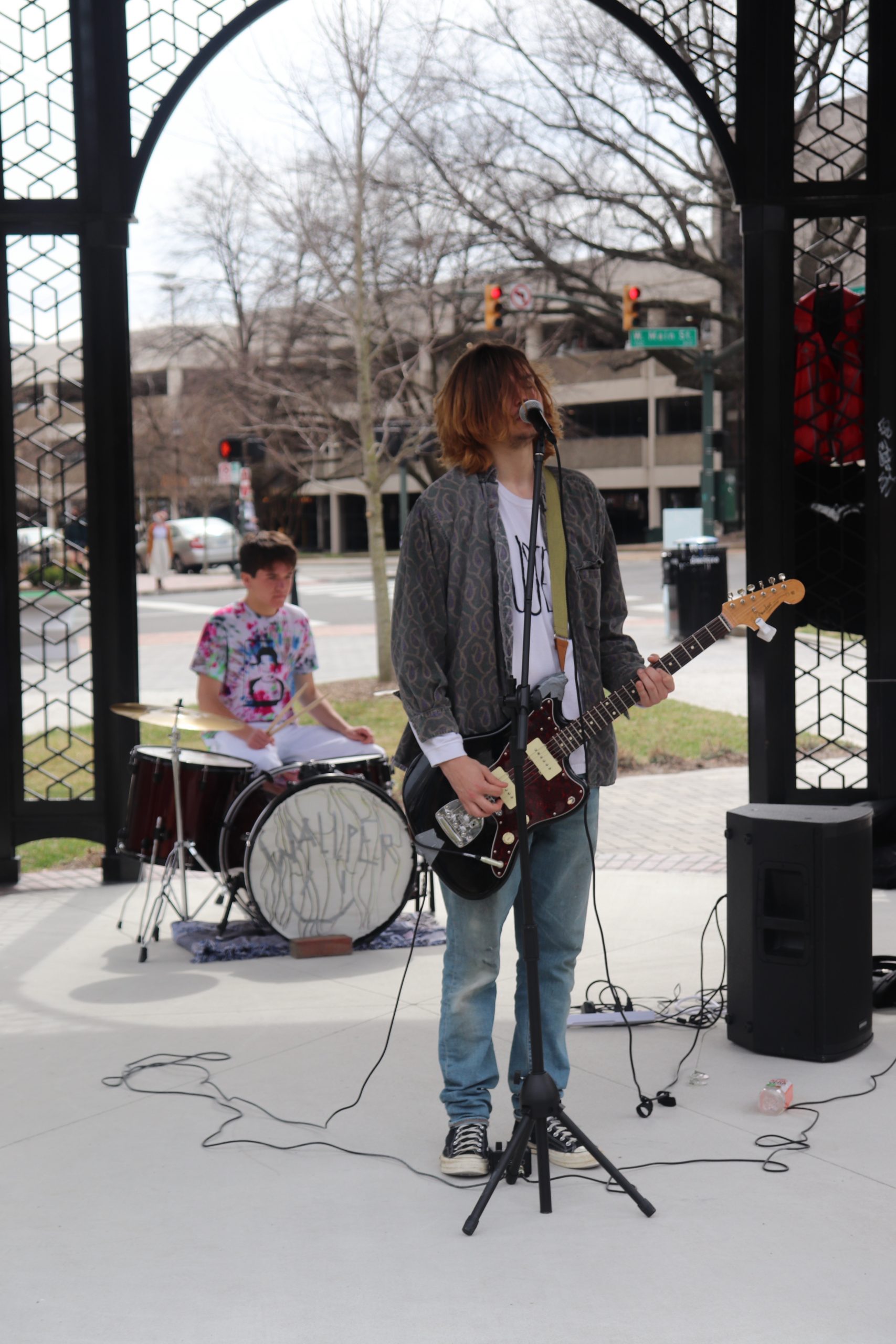 While it may seem that there is no one uniting theme to Wallpaper, the truth is that as different as every Wallpaper song is, they all have, in the band’s words, a “cathartic” essence to them.

“Wallpaper is all about catharsis…So if someone comes to the show and is feeling bad… they like dance around for a while and feel better then that’s the message,” Andrew said

The bandmates explained how the name of their band is very closely intertwined with their sound. Jack talked about the day they picked the name.

“We were playing in our friend’s room, and he had these childhood paintings on his walls of things like trains and moons and stuff,” Jack said.

Andrew added, “We locked into this state of looking into the back corner of the room… sort of like this staring off in the distance, a very melancholy feeling, and the paintings were on wallpaper, and that’s how we got our name…the band never had any other name. Wallpaper is a feeling I want to recapture every time I sit down and write a song.”

This spacey faraway feeling, paired with the band’s cathartic choruses (or, as Andrew calls them “Loud Parts”) combine into their original sound. Andrew and Jack expressed how they particularly drew inspiration from Horse Jumper of Love, Nirvana, Minor Threat, and Mogwai.

“If you put Mogwai in there with all those other bands and stir it around for a couple hours you get the Wallpaper gumbo,” They said.

The duo has a deep appreciation for the punk rock genre. “I think punk music is just ingrained, no matter what we write”, Andrew said. “Punk rock is like one of those things that will never leave us.”

Throughout the last year, Wallpaper has accomplished  much, despite the extremely difficult circumstances. When I spoke with the band last April, they recounted some of the struggles caused by the pandemic.

“We can’t really go rehearse together, because we’re in separate dorms, can’t really have drums in the dorm, so it’s basically just the worst possible scenario. Any convenience is eliminated,” Jack said.

Even the extremely creative park shows that Wallpaper played last year were done partially out of necessity as traditional spaces for performance were shut down. Despite all this, the bandmates persisted saying how they “love it enough to the point where it doesn’t matter,” and in that spirit, they continue to charge ahead. The band also talked about how they were amazed at how fast their fanbase grew.

“Part of it was people were tired of not seeing live music so when we were able to put shows together and people were excited about that…but there are bands now that are out that are really good, but people are still coming to our shows,” they said.

The band emphasizes that they want their shows to be a safe, comfortable space for all their fans, saying that Wallpaper is dedicated to “creating an atmosphere that allows people to let loose more, no matter  if we have fifty fans or a million fans.”

The bandmates did give big credit to their behind-the-scenes friends and the fellow creators in Richmond. Andrew specifically talked about their prom-themed show.

“We wanted to have cool lighting….well let’s just ask people, and  you know people who know people and we wound up getting two really incredible lighting technicians… the community in Richmond is really strong… and it’s been really cool to see people come together around songs that we’ve made,” he said.

Wallpaper is shifting its focus this year, but it’s definitely not slowing down. The bandmates told me how they are so proud of their accomplishments in this past year and now with some distance, they also see how much more they can do. They talked about feeling a real time pressure with getting their work out last semester and now with the limitations of the pandemic affecting them less, they find their work has more “breathing room” and they are able to expand their goals.

“Instead of just being a  band that plays on campus, we want to be just a band,” they said.

A particular new project the bandmates are very excited about is an upcoming original album.

“The biggest thing that’s changed in terms of our goals is the album, just making a real piece of art, like imagining ourselves as a record in a record collection, we’re trying to make a really transcendent piece of music that connects with people emotionally,” Andrew said.

Jack added, “We want it to be something they can constantly return to rather than the spotiness of a live show…We want to make an album so good that people forget they know us, something so good and beautiful that people will find it on their own and just be like, ‘what is this?’”

Well, we at INK believe that Wallpaper will be going to ever greater places. Be sure to listen to their EP which dropped this past April, and is available on all platforms, and check out their Instagram @wallpaperband, and in the words of Wallpaper,  “love music, play music, be yourself, and don’t hurt anyone.”