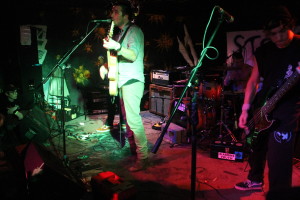 Diamond Youth . On Tuesday there was the release of their new EP entitled Shake and the kick-off of their new tour in Richmond started Wednesday alongside Turnstile, Turnover, Angel Du$t and Blind Justice at Strange Matter.

Diamond Youth’s set came in as a nice sound break on a tour chock full of hardcore acts, such as Turnstile, who play a brand of 90’s style hardcore, and Blind Justice who bring things all the way back to the 80’s. The latter even went so far as to throw in a cover of “Nervous Breakdown,” by Black Flag. This does not at all imply that Diamond Youth underperformed or rested during their set.

While devoid of hardcore dancing and crowd surfers the band poured out their alternative pop rock with an air of soulful passion and sincerity that could drag in any pedestrian who stayed long enough.

As Diamond Youth moved through their set they played two new songs from the EP, “Red Water,” a nearly surf style jam, and “Can’t Shake the Feeling,” a catchy song that benefits from diverging guitar work.

The songs managed to carry the bands traditional airy and insightful alt-rock while still bringing new elements of growth.

With the new also came a good dose of fan favorites, most notably “Cannonball,” which was met with an array of favorable nodding heads and shivers as the song’s high-noted vocal accompaniment spread through the small venue.

While I heard Diamond Youth a few times before, I never had interest in them until I began to see their live performances a few months back. With some roots in Richmond the band tends to come around a lot and I had the pleasure of crossing paths with their music while I waited for other artists to play.

They are a band that gives you the full experience and envelops you in the music as they stroll through a set of endearing songs. I’m proud to have become a fan.

All around it was an excellent dive to take into new music and a mid-week concert never hurts the soul as we move forward through class to the weekend.