Writing and Photos by MiJin Cho 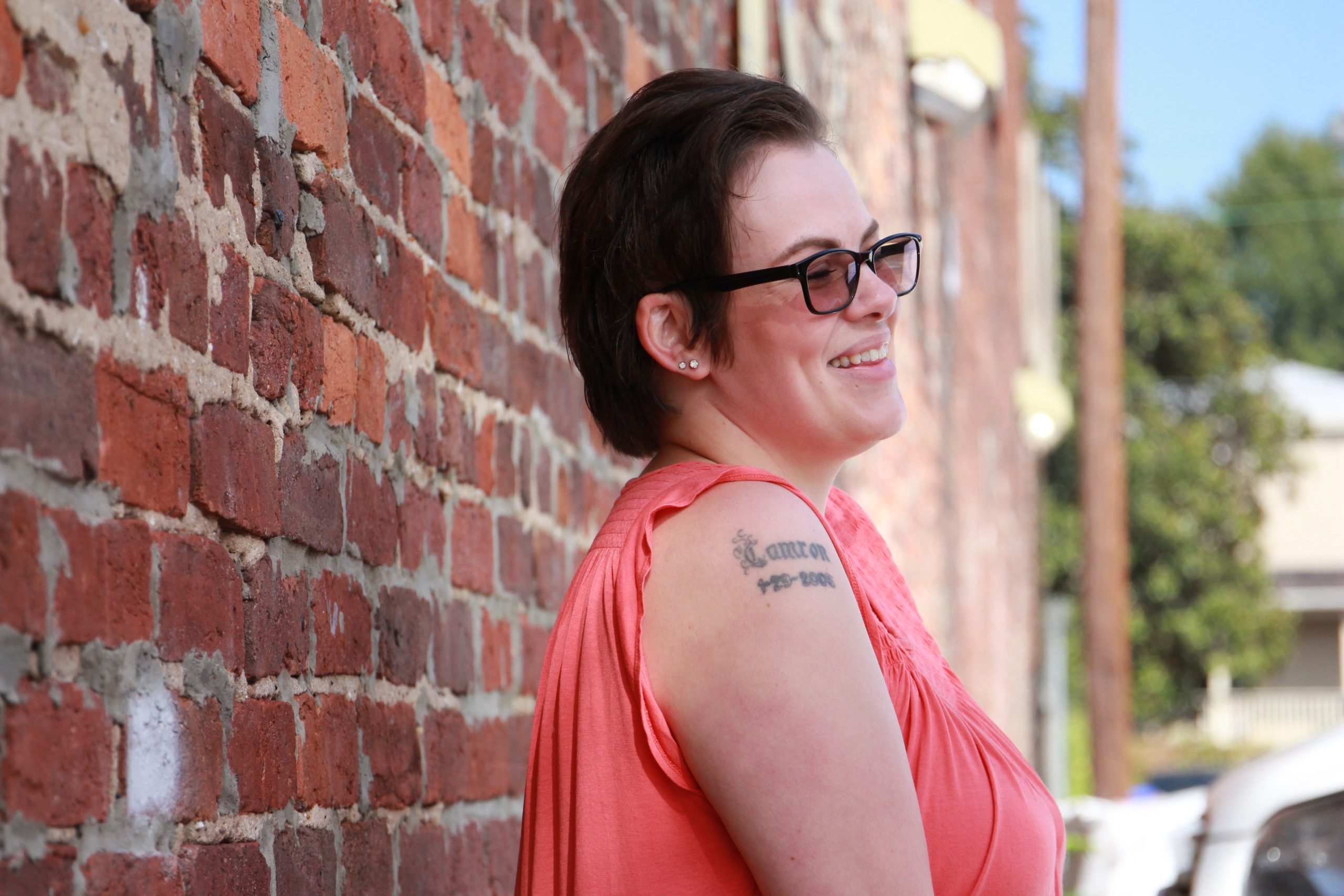 The following is a written narrative of a woman named Angela Lynch. She is a mother of three, a survivor of substance abuse, and an advocate for trauma-informed care. Through the REAL Life Program of Richmond, Lynch shares an anecdote about forgiveness, hope and recovery — an accumulation of short stories that build her narrative, her life, and her philosophy. Although I can’t capture the full essence of Lynch’s life experiences, I aim to convey a small portion of her life to capture her humanity.

Something flared inside 33 year-old Angela Lynch as she hunched over the telephone post at the Virginia Peninsula Regional Jail (VPRJ): an immediate feeling of hope, an overwhelming sense of validation, an automatic pull of the waterwork in Lynch’s eyes. The sensation flooded Lynch as she listened to her 14-year-old son, Camron, forgive her — an understanding for the way her past wounds and coping mechanisms affected the Lynch family.

Restorative healing for REAL Life resident, Angela Lynch, began with a phone call. That call, however, didn’t come easily. When Lynch was first incarcerated Dec. 31, 2018, Camron refused to talk to her over the phone. Only after a couple of months did he begin speaking to her and eventually, forgiving her.

“Camron’s been through so much with me,” Lynch said. “He’s seen me come out of the bathroom with a completely infected arm, oozing pus and blood, while I’m high. He’s taken care of the little one and myself when I was coming off of a run. Hearing him tell me that he forgives me for the things that I’ve done… that was a really happy moment. I cried.”

This moment of forgiveness came late in Lynch’s story of recovery; her battle with substance abuse takes her back age 13 in Germany, where she faced the abuse of her parents, who were struggling with alcoholism.

“I suffered a lot of abuse during my childhood, physical, verbal, the whole spectrum. When my brothers and I would get in trouble, we’d have to take our shirts off and lay on the bed and we’d get beat with a piece of garden hose. Our dad would take it and just beat us to the point where we would have bloody welts on our backs,” Lynch said. 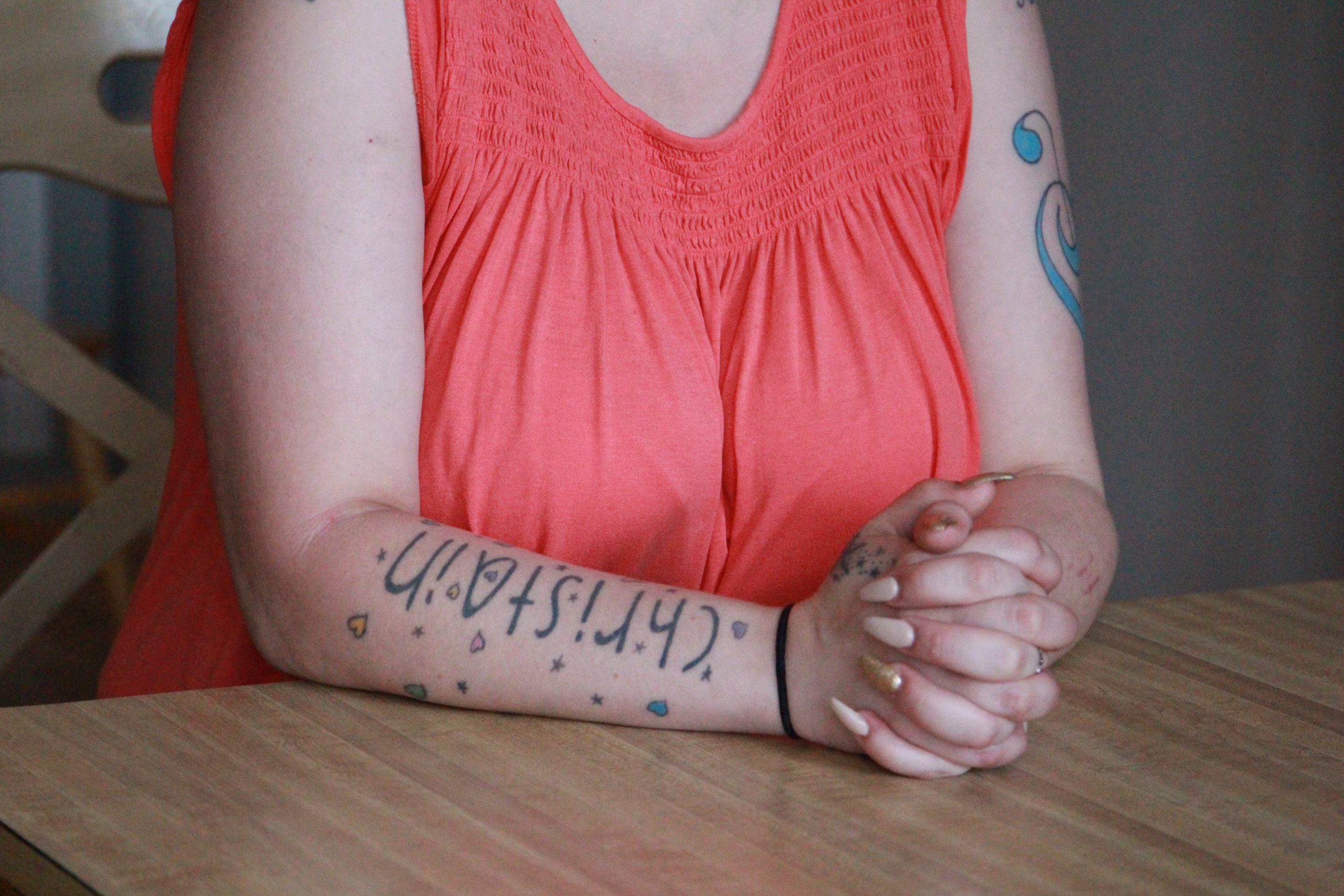 Stopping her hands from fidgeting, Angela Lynch clasps her hands together as she recalls a deeply-embedded childhood trauma within her family. The trauma from her past had pushed Lynch into using substances during her adolescent years to avoid the feelings associated with the memories. “It was just easier to get high or drunk and forget about the abuse I suffered from as a child. I didn’t have to feel anything anymore. It’s how I coped,” Lynch said.

By the time she entered her adolescent years, Lynch held onto a deep emotional scar, one she did not know how to handle. With the influence of her high school classmates, she turned to drugs and substances as her coping mechanism.

“When I was 13, I started with marijuana and alcohol. When I was 15, I tried methamphetamine for the first time. And after that, it was cocaine, ecstasy, mushrooms, pretty much anything under the sun — prescription medications, narcotics, everything. For the past 20 years, it’s just been taking anything that I could get my hands on,” Lynch said.

Between school, family, and the formation of an addiction, Lynch’s only means of protection came in the form of her oldest brother, Jerry, who recently passed away in a car accident in March, 2019. She remembers the solidarity of her five siblings and the heartache that resulted from the family’s use of substances.

“My oldest brother was like my best friend. Like nobody was allowed to pick on me besides him. He put my other brothers back in their place. The four brothers and I, we don’t talk anymore. A lot of things went bad, between money and drugs. Our addictions ruined that part of my family,” Lynch said.

Lynch went on to graduate high school at the age of 15 and earn a college pharmacy degree. In 2008, at 22-years old, Lynch moved from Germany to Arizona, seeking to obtain a pharmacy license for a position as a pharmacy technician. This new endeavor in pharmacy, however, became one of her biggest challenges in battling her addiction.

“When people say, ‘turn your hobby into your job’, I did that,” Lynch said. “While I was working, I stole a lot of the prescription medications, the narcotics and things like that. I would steal fentanyl patches, I would to go to the bathroom and sniff pills. I got away with it for about 10 months.”

Her arms and shoulders filled with colorful ink, Lynch uses the names and birthdays of her three sons, Camron, Mikah, and Parker, as inspiration for her tattoos. “Anybody can be a mother or father, but to actually be mommy and daddy — that’s a whole another level. I don’t want to be just someone who gave birth to my boys. I had them boys for a reason,” Lynch said.

Ten months into her job, Lynch was caught. She was eventually arrested on Dec. 31, 2018 on the charge of three felonies: larceny, prescription drugs, and embezzlement. Lynch was extradited to Williamsburg on January 15th.

“So I was just sitting there, coming off of all of the practical pain and oxycontin. I was sitting there looking back at all of the wreckage over the past 20 years. I lost my marriage, my three children, my career. I’ve lost everything. And at that point, being locked up, I was like, ‘I seriously have a problem.’ It was like, I would get to a point, but I always end up losing it because of my addiction. At that point, I figured out it was the drugs,” Lynch said.

For eight months, Lynch stayed at the VPRJ, where she received a three-year probation with a two-year suspended sentence. During the extradictment, she signed up for the three-month We Are In This Together (WAITT) recovery program at VPRJ. Lynch graduated on May 28th, 2019 and decided to stay for another round to mentor the following class of WAITT. She met her best friend, Elizabeth Bellamy, during that time, and they both graduated WAITT on Sept. 5th. From there, they boarded the REAL Life House.

“I’ve been at the recovery house for three weeks now. The structure helps a lot, having to go to five NA meetings a week or church, having to look for a job. Without it, I would probably be slacking off here and there. It’s good to get out of my addiction and living my addiction,” Lynch said. 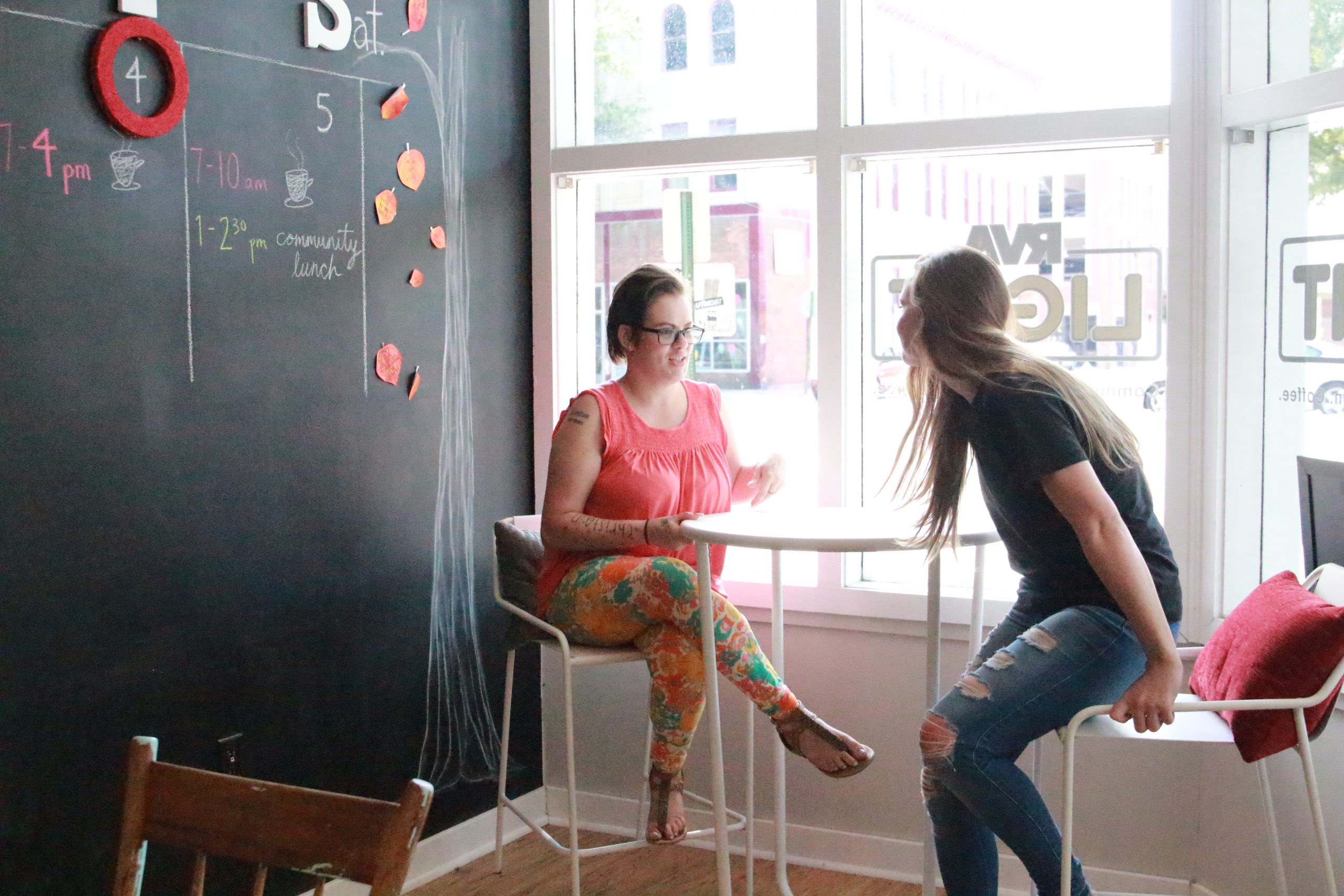 Taking a seat next to the glass windows at the RVA Light Cafe in downtown Richmond, Angela Lynch and her best friend, Elizabeth Bellamy, begin a quiet conversation about a meeting at their REAL Life female recovery home.“The recovery house is wonderful. I’m learning how to live a healthy life,” Lynch said.

As of Oct. 4th, Lynch has been clean for nine months. She marches on, beginning her new job as a sheet metal helper in Richmond.

“I’m just doing the best I can to get back on my feet get my life back together and be the mother that my children deserve. As a mother, you carry that guilt with you, that shame. Because mothers aren’t supposed to be out there, prostituting themselves for drugs. They’re not supposed to be leaving their kids home alone to get high. That’s not what mothers do, not loving mothers anyway. To me, that’s a whole another level. I owe my kids everything,” Lynch said.

Lynch continues to build her resilience, one hope, one dream, one phone call at a time. From her cohort at VPRJ to the group of recovering women at REAL Life, she fights for full recovery and seeks a form of validation that comes with forgiveness.

“The high I get now is just from sitting up at 5:30 in the morning with Liz, drinking coffee and smoking a cigarette. What we laugh about, that feeling right there, is better than any feeling that any drug has ever given me. As corny as it sounds, I am happy,” Lynch said. 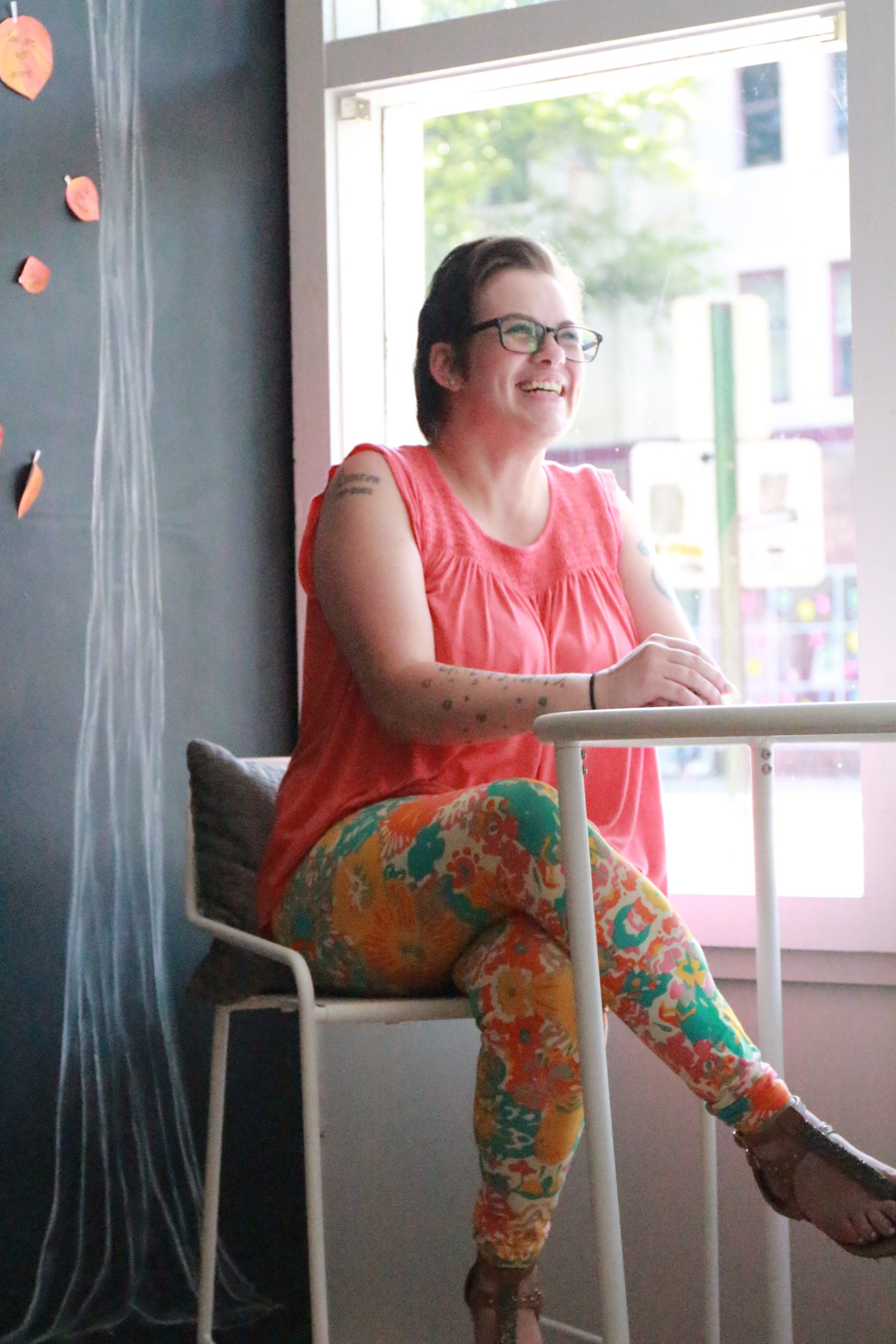 At 33 years-old, Angela Lynch is still recovering from her previous substance abuse. She is part of the REAL Life female recovery home and an empowerment program, called Expectant Mothers Program. Lynch continues to fight against her addiction and seeks to build resilience against her past trauma and its resulting wounds.

Angela Lynch, a narrative of forgiveness and restoration 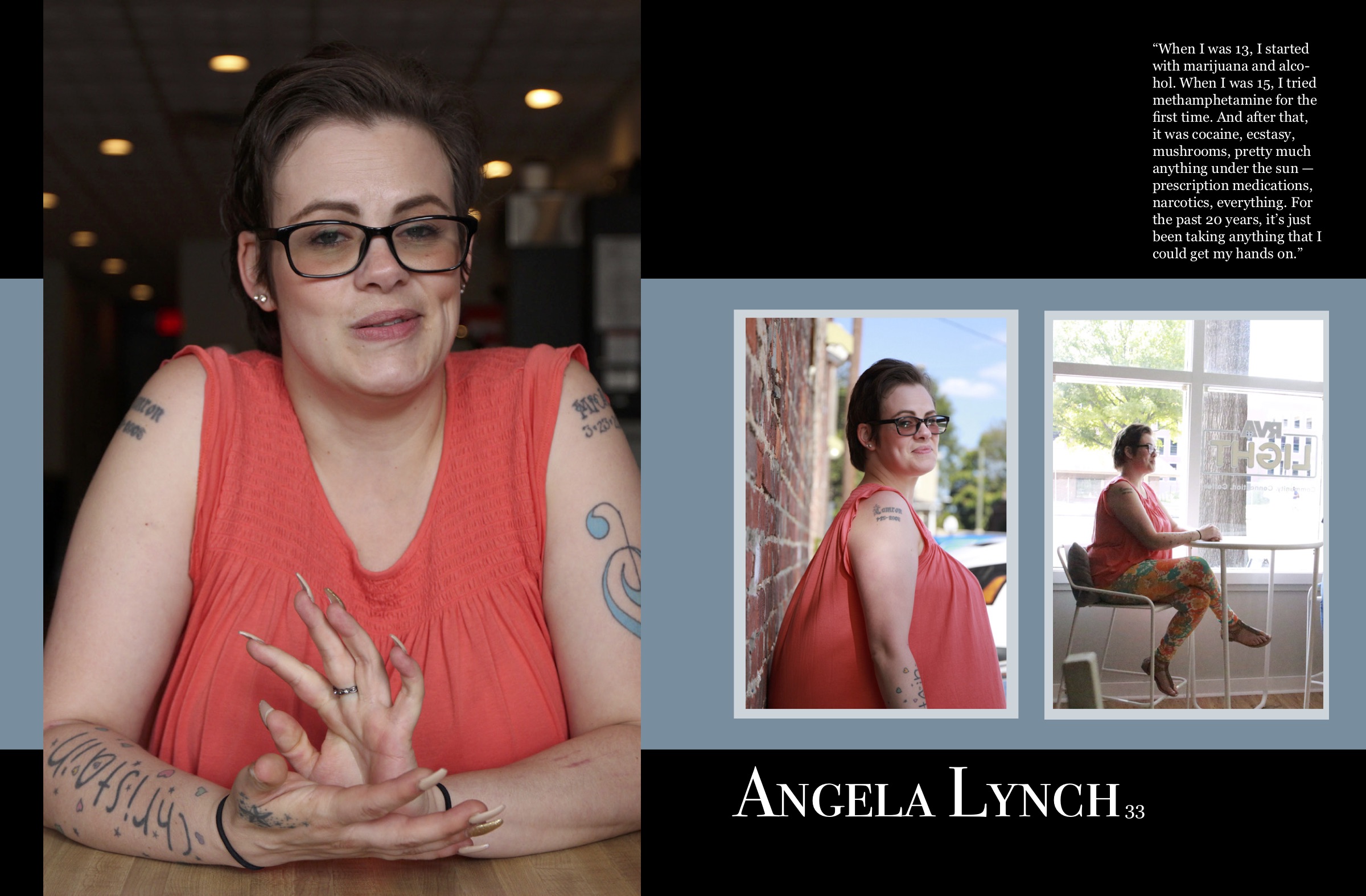